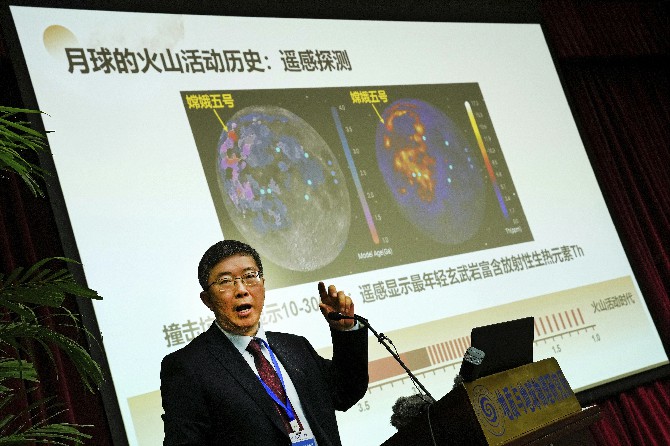 Moon rocks brought back to Earth by a Chinese robotic spacecraft last year have provided new insights into ancient lunar volcanic activity, a researcher said yesterday.
Li Xianhua said an analysis of the samples revealed new information about the moon’s chemical composition and the way heat affected its development.
Li said the samples indicate volcanic activity was still occurring on the moon as recently as 2 billion years ago, compared to previous estimates that such activity halted between 2.8 billion and 3 billion years ago.
“Volcanic activities are a very important thing on the moon. They show the vitality inside the moon, and represent the recycling of energy and matter inside the moon,” Li told reporters.
China in December brought back the first rocks from the moon since missions by the U.S. and former Soviet Union in the 1970s.
On Saturday, China launched a new three-person crew to its space station, a new milestone in a space program that has advanced rapidly in recent years.
China became only the third country after the former Soviet Union and the United States to put a person in space on its own in 2003 and now ranks among the leading space powers.
Alongside its crewed program, it has expanded its work on robotic exploration, retrieving the lunar samples and landing a rover on the little-explored far side of the moon. It has also placed the Tianwen-1 space probe on Mars, whose accompanying Zhurong rover has been exploring for evidence of life on the red planet.
China also plans to collect soil from an asteroid and bring back additional lunar samples. The country also hopes to land people on the moon and possibly build a scientific base there. A highly secretive space plane is also reportedly under development.
The military-run Chinese space program has also drawn controversy. China’s Foreign Ministry on Monday brushed-off a report that China had tested a hypersonic missile two months ago. A ministry spokesperson said it had merely tested whether a new spacecraft could be reused. MDT/AP