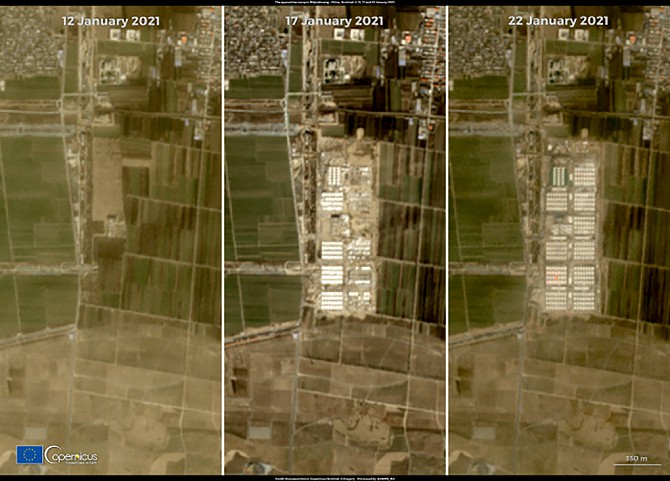 A sprawling quarantine center is more than 4,000 rooms is being thrown up in northern China in response to a COVID-19 outbreak in Shijiazhuang, a city of more than 10 million people in Hebei province.
Satellite images from the European Space Agency show dramatic changes over 10 days in an area where there had been only flat land before construction started on Jan. 13.
Rows of prefabricated houses can be seen. The official People’s Daily newspaper said more than 600 rooms were ready by Jan. 19. Another 3,600 are to be added by the time of completion.
Construction workers and materials have been sent from all over the country to help build the center, state media reported. It’s common practice for China to mobilize resources nationwide to tackle natural disasters and other crises.
Last year, two hospitals, Huoshenshan and Leishenshan, were built within days to treat COVID-19 patients in the city of Wuhan, where the coronavirus was first detected.
China has largely curbed the domestic spread of the virus, but is battling outbreaks this winter in its frigid north. The National Health Commission yesterday reported 145 new cases in the latest 24-hour period, including 11 in Hubei province.
The quarantine center is designed to house people who have been in contact with COVID-19 patients. Each room, for one person only, is 18 square meters and comes with bedding, a desk, an air conditioner, a television and Wi-Fi, the China News Service reported. AP