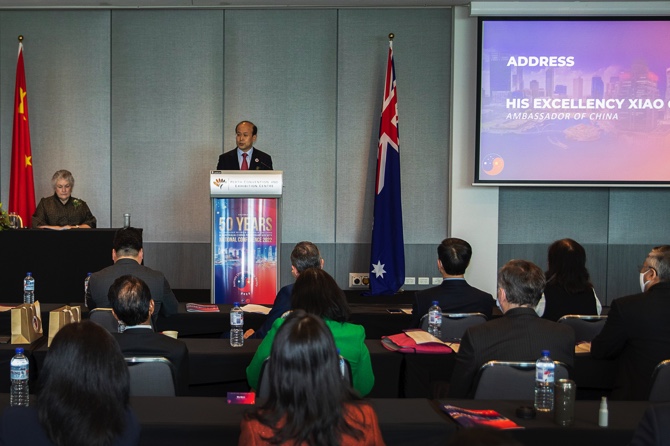 China’s ambassador to Australia says relations between the two countries are at a “new juncture” with the election of a new Australian government and the first minister-to-minister talks in more than two years.

Ambassador Xiao Qian gave an upbeat assessment of the potential for the bilateral relationship in a weekend speech to the Australia-China Friendship Society in the west coast city of Perth. The speech was published yesterday on the embassy’s website.

“The international, political and economic landscape is undergoing profound and complex changes. The China-Australia relationship is at a new juncture, facing many opportunities,” Xiao said.

“My embassy and the Chinese consulates-general in Australia stand ready to work with the Australian federal government, state governments and friends from all walks of life to move forward the China-Australia relationship along the right track to the benefits of our two countries and two peoples,” Xiao added.

Marles described the meeting as a “critical first step” in repairing bilateral relations. But observers are wary of describing the meeting as a thawing of a diplomatic deep freeze between the countries.

Dennis Richardson, a former head of Defense, Foreign Affairs and the spy agency Australian Security Intelligence Organisation as well as a former Australian ambassador to the United States, noted that both governments took their first opportunity to have ministerial contact since Australia’s government changed at elections May 21.

Bilateral relations had soured in the nine years that a conservative coalition had held power.

“The fact that they agreed to talk at the very first opportunity is noteworthy,” Richardson told Australian Broadcasting Corp yesterday.

“I don’t think we should get too far down the track on this. We have a long way to go,” Richardson added.

Malcolm Davis, a senior analyst in defense strategy and capability at the Australian Strategic Policy Institute think tank, warned against overstating the significance of the meeting.

“They had an hourlong meeting where they exchanged, in a frank and full manner, their respective views. That does not equate to restoring the status quo ante of the Australian relationship as it existed prior to 2015 when the relationship was reasonably good,” Davis said.

Chinese Premier Li Keqiang wrote to congratulate Australian Prime Minister Anthony Albanese days after his election victory in a gesture seen by some as China seeking to reset the relationship.

Albanese responded by urging China to show goodwill by lifting a series of official and unofficial trade barriers created in recent years to a range of Australian exports worth billions of dollars including coal, wine, barley, beef and seafood.

“It would have to come at some price of Australia agreeing to Chinese demands. I just don’t think the politics at the moment are going to allow for that,” Gill said.

Bilateral relations plumbed new depths early in the pandemic when Australia called for an independent investigation into the origins of and responses to COVID-19.

China’s latest ambassador to Australia has set a more conciliatory tone since he arrived in Canberra in January than his predecessor, Cheng Jingye, did.

Cheng warned in 2020 of Chinese trade boycotts if Australia persisted with its call for a COVID-19 inquiry. ROD McGUIRK, CANBERRA, MDT/AP