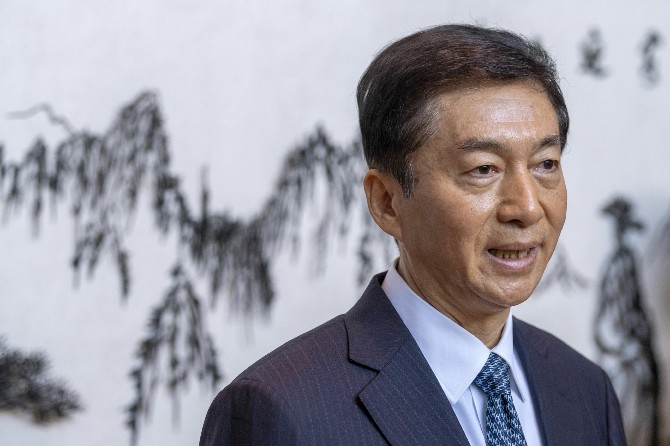 Luo Huining, director of the Liaison Office in Hong Kong

China’s new top official in Hong Kong urged the city to enact national security legislation, raising speculation that Beijing might renew its push for a bill that prompted mass protests almost two decades ago.
Luo Huining, who was appointed earlier this month to lead China’s Liaison Office in Hong Kong, wrote in the Communist Party’s People’s Daily newspaper Monday that “external forces will infiltrate China without inhibition” if the city failed to pass such legislation. Luo cited the neighboring former colony of Macau and its adoption of a strict national security law as a model.
Luo’s commentary was carried on the ninth page of the printed People’s Daily, a placement that would suggest the issue was one of lesser priority by the traditions of the party’s top mouthpiece. Still, the comments could stoke fears among Hong Kong’s pro-democracy camp that China is looking to tighten its grip after months of historic unrest.
While Luo didn’t specify what legislation Beijing wanted passed, he described the action as Hong Kong’s constitutional obligation, suggesting that he was referring to national security measures required by Article 23 of the city’s Basic Law. The Hong Kong government hasn’t made a serious effort to pass such legislation since 2003 when hundreds of thousands of people took to the streets in opposition.
Luo’s comments come after Hong Kong Chief Executive Carrie Lam said it was her government’s duty to advance a law banning insults of the Chinese national anthem. Pushing forward with either bill could provoke a backlash from the city’s protesters, who had turned out with less frequency in recent weeks.
Fresh protests on Sunday shattered a brief lull in violent demonstrations over Christmas and ahead of the Lunar New Year holiday, following a large demonstration in early December. Lam’s efforts to ignore dissenting voices and push through a bill allowing extraditions from Hong Kong to mainland China ignited the protests in June, which have battered the city’s economy into a recession and undermined the financial hub’s global reputation.
Article 23 of the Basic Law – sometimes referred to as Hong Kong’s mini-constitution – requires the enactment of national security legislation that would prohibit the theft of state secrets, sedition and subversion against China’s national government. Iain Marlow & Claire Che, Bloomberg