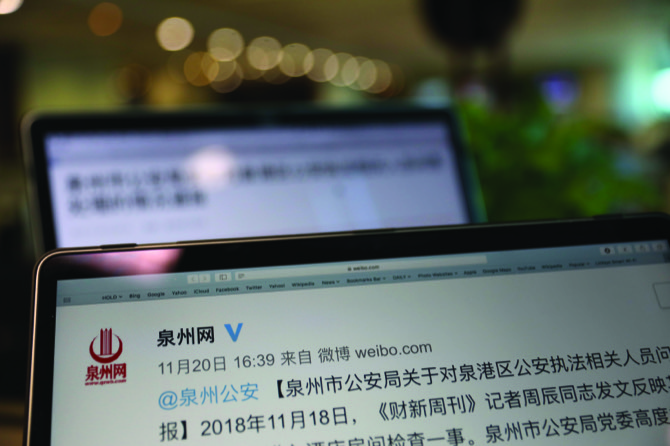 The young woman is panting, panicked, her thin arm pointing at four men in police uniforms who had let themselves into her hotel room near midnight.

“You cannot treat me like this,” she shouts, her voice high and reeling. “You cannot barge in like this late at night, OK? I didn’t do anything illegal.”

The men, one carrying a pair of thin white plastic restraints, tell her they are doing a “routine inspection,” according to a video of the Nov. 11 incident seen by The Associated Press.

Only there was nothing routine about this. Their target was Zhou Chen, an environmental reporter for Caixin, one of China’s most respected business media groups. She was on a reporting trip to Quanzhou, a city in southeastern China’s Fujian province, to investigate a petrochemical leak that sickened more than 50 people.

Journalists in China are regularly tailed and harassed by local authorities, but few Chinese reporters publicly discuss the details. Zhou broke the silence about her harassment in an article published this week, prompting an outcry on social media and a rare apology from the police.

Reporters Without Borders ranks China 176 out of 180 in its World Press Freedom Index and says more than 50 journalists and bloggers are detained “in conditions that pose a threat to their lives.” China’s ruling Communist Party is eager to suppress information that might contribute to social instability, while local officials often try to interfere with reporting on sensitive topics.

On Nov. 4, around 7 tons of the petroleum derivative C9 leaked into the sea off Quanzhou. Dozens of residents fell sick, and scores of fish died. Local residents complained that officials mishandled the cleanup and tried to cover up the extent of the damage.

Zhou went to investigate. On Nov. 11, after a long day of reporting, she was in bed, in her pajamas, looking at her phone when she heard a keycard unlocking the door of her hotel room. It was 11:30 p.m.

“You barged in like this when I’m not even properly dressed,” Zhou shouts in the video. “Could you please leave immediately?”

The men demanded her ID. They did a cursory search of the room, flipping the curtains back and forth, and warned her to watch out for her safety.

Zhou’s account of her terrifying night was published Monday in Caixin Weekly, part of the Caixin Media group. The police search capped a day of bullying, according to her article. She wrote that she had been blocked from taking photos by people wearing body cameras and tailed as a mother and daughter took her to see dead fish floating in their family fish farm.

According to Zhou, the police didn’t show her any documents authorizing their late-night search, as required by Chinese law. Hotels in China must register their guests’ information with the police, and a hotel receptionist later told Zhou that the police had asked for her room card specifically.

“I finally have seen firsthand how lawless and unscrupulous the abuse of official power can be,” she wrote. After the men left her room, she wrote that she sat for some time “in a frightened daze.”