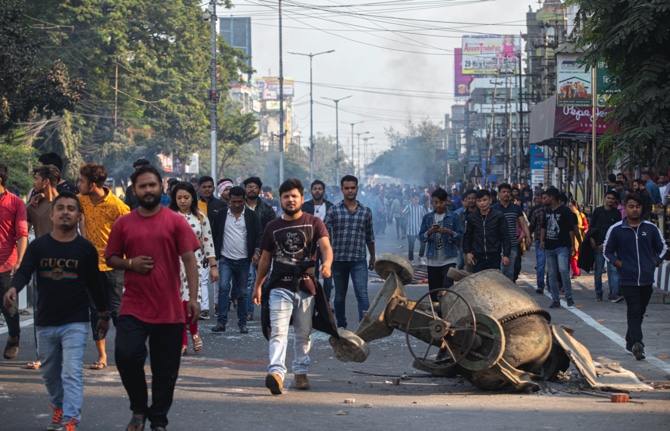 Police arrested dozens of people and enforced a curfew yesteday in several districts in India’s northeastern Assam state where thousands protested legislation that would grant citizenship to non-Muslims who migrated from neighboring countries.

Protesters defied the curfew in Gauhati, the state capital, yesterday morning and burned tires before police dispersed them. Soldiers drove and marched though the streets to reinforce police in violence-hit districts, which included Gauhati and Dibrugarh, said state police chief Bhaskar Mahanta.

The protesters in Assam oppose the legislation out of concern that migrants will move to the border region and dilute the culture and political sway of those who already live there. The legislation was passed by Parliament on Wednesday and now needs to be signed by the country’s ceremonial president, a formality, before becoming law.

Prime Minister Narendra Modi appealed for peace and in a tweet said: “I want to assure them — no one can take away your rights, unique identity and beautiful culture. It will continue to flourish and grow.”

While those protesting in Assam are opposed to the bill because of worries it will allow more migrants regardless of their religion, others consider the measure as discriminatory for not applying to Muslims.

The Citizenship Amendment Bill seeks to grant Indian nationality to Buddhists, Christians, Hindus, Jains, Parsis and Sikhs who fled Pakistan, Afghanistan and Bangladesh because of religious persecution before 2015. It does not, however, extend to Rohingya Muslim refugees who fled persecution in Myanmar.

Home Minister Amit Shah rejected criticism the legislation was anti-Muslim, saying it did not affect the existing path to citizenship available to all communities.

“Welcoming asylum seekers is a positive step, but in a secular country like India, slamming the door on persecuted Muslims and other communities merely for their faith reeks of fear-mongering and bigotry,” the group said in a statement.

Several opposition lawmakers who debated the bill in Parliament said it would be challenged in court.

The bill’s passage follows a contentious citizenship registry exercise in Assam intended to identify legal residents and weed out those in the country illegally. Shah has pledged to roll it out nationwide, promising to rid India of “infiltrators.”

Nearly 2 million people in Assam were excluded from the list — about half Hindus and the other half Muslims — and have been asked to prove their citizenship or else be rendered stateless.

India is constructing a detention center for some of the tens of thousands the courts are expected to ultimately determine came to the country illegally.

But for many Hindus who were left off Assam’s citizenship list, the bill could provide protection and a fast track to naturalization.

In curfew-bound Gauhati, police escorted a team of Japanese security officials to their hotel to prepare for a likely visit of Japanese Prime Minister Shinzo Abe on Sunday for a summit with Modi.

Abe’s visit has yet to be officially announced by India and media reports suggest the summit may shift from Gauhati to another city because of ongoing protests.

Assam, one of the Indian states where foreign journalists require permission to visit, was likely chosen as a venue for Abe’s visit because it is home to several Japanese government-aided projects.

Kumar also said that Bangladesh Foreign Minister A.K. Abdul Momen had cancelled his three-day visit to India. Kumar said Bangladesh informed India that the visit was put off due to domestic issues and commemoration of its national day. Wasbir Hussain, Gauhati, AP