Civil referendum | Jason has a Plan B if new appeal fails 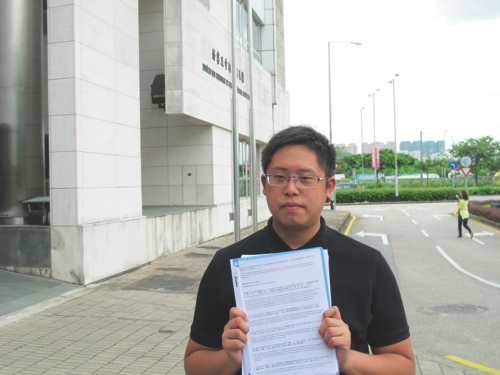 The Open Macau Society filed an appeal to the Court of Final Appeal yesterday, contesting the Civic and Municipal Affairs Bureau (IACM)’s latest refusal to allow them to set up polling stations in the streets.
The group is set to launch a civil referendum against the Chief Executive election that will take place at the end of the month. They aim to set up five polling stations.
IACM, the public department that oversees the use of public venues, informed the Society on Monday that an opinion poll does not meet the definition of assembly, and if the group continues to insist, IACM will no longer accept its requests.
The Open Macau Society claims that this violates the right to assemble and to demonstrate.
“After analyzing the judgment, we deem that, although promoting the civil referendum does not meet the definition of assembly, operating the polling stations does,” said Jason Chao, president of the Society.
The group reasoned in their appeal: “The distinction of the civil referendum from a sample-based survey rests on the ‘active’ and ‘passive’ roles of the citizens, which means that in the former case citizens have to actively express [their views] in order to represent themselves, but in the latter case the citizens are passively represented. In this sense, the civic referendum per se is very close to a ‘demonstration,’ because the active participation of citizens to express their views is crucial.”
Chao also recalled that, back in 2012, when he worked as president of the New Macau Association, they were allowed to set up polling stations in public      regarding the political development of Macau. “If this time the IACM doesn’t give us permission, it is obvious that they’ve violated the principle of fairness,” he stated.
He estimated that it would take about one week for the result to arrive. “No matter how the result turns out, we will try all means possible to make sure citizens can participate in the civil referendum by visiting our physical polling stations.” Chao also said they would have backup plans, which would be announced later.
Yesterday morning, Chief Executive Electoral Management Committee President Song Man Lei announced that guidelines would be published to prohibit any polling results being released, effective from midnight Aug 16 to midnight Sep 1.
“What I want to stress is that those who release polling results in any means within the prohibited period may be accused through criminal procedures,” Ms Song said in a press conference held by the Committee yesterday.
The Society had announced earlier that the result of the first motion asking for opinions on universal suffrage would be released on Aug 31, the same day as the election. However, the result of the second motion, regarding whether interviewees support specific CE candidates, would be released on Sep 2, so as to avoid violation of the electoral law.
Despite the statement from Song, Mr Chao confirmed yesterday that the result of first motion and the overall turnout of the civil referendum will still be released on Aug 31.
“We won’t change that because it’s so clear according to article 75 of the chief executive election law, the result of the polls only concerns the attitude toward candidates. It is explicitly written in the law,” he insisted.