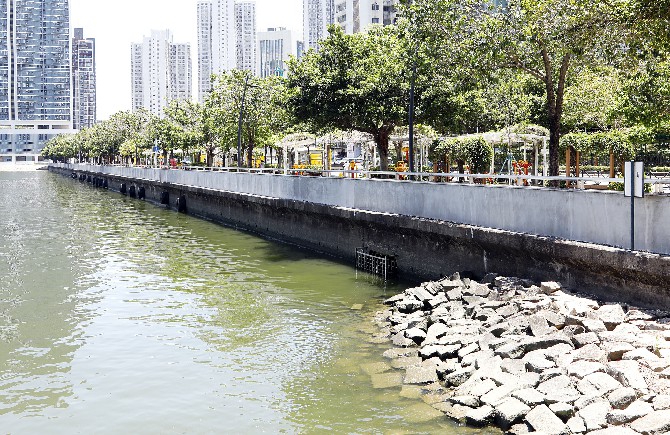 The Land, Public Works and Transport Bureau (DSSOPT) has announced that the construction works building a coastal flood prevention barrier in Fai Chi Kei and Ilha Verde are concluding, with the areas to be fully reopened to the public shortly.
In a statement to the media, the DSSOPT noted that the works, which have included increasing the height of some walls located along the coastline between the two zones, building a “rotary jet grouting pile water-resisting curtain” and installing floodgates, are about to be completed. Some areas where works are already complete have been reopened to the public.
The walls which have been increased in height are located along the coastline between the leisure area of Avenida Marginal do Lam Mau and Rua da Ilha Verde, raising the concrete floodwalls to a height of at least 3.2 meters above sea level. The water-resistant curtain has the effect of blocking the entry of water into some areas. This work also includes the installation of one-way valves at the exits of the existing storm sewers on the coast which will prevent backflow of seawater.
The bureau said that the works will improve flood prevention capacity along the coastline between the Fai Chi Kei District and Ilha Verde, minimizing impacts on the lives of citizens due to rising seawater levels, such as during storms.
In relation to the rest of the work, the DSSOPT stated that “due to the reorganization and improvement of some drainage installations, there has to be coordination with the [relevant] services and the issue is being monitored as quickly as possible.”
The last phase of construction is taking place in areas with a reduced circulation of people, and will therefore have a lower impact on the population.
Since works have concluded in the Fai Chi Kei area, the Fai Chi Kei North Bay Leisure Area has now reopened to the public.