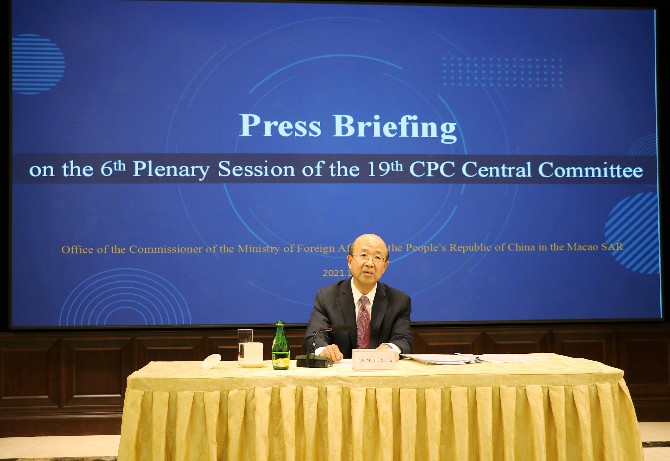 At a press briefing last Friday, the Commissioner of the Foreign Affairs Ministry in Macau Liu Xianfa highlighted the fundamental principles, directives and goals introduced by the “third resolution,” which was adopted by the 6th Plenary Session of the 19th Communist Party Central Committee held this year on the centenary of the CPC.
“Over the past hundred years, the Party has led the people to a number of important milestones: achieving great success in the new-democratic revolution; achieving great success in socialist revolution and construction; achieving great success in reform, opening up, and socialist modernization; and achieving great success for socialism with Chinese characteristics in the new era. The endeavors of the Party and the people over the past century represent the most magnificent chapter in the millennia-long history of the Chinese nation,” Liu said.
Addressing Portuguese and English press and diplomats from the Forum Macau in English for over 30 minutes, Liu pinpointed the “four great transformations” described by the “third resolution.”
“In the new-democratic revolution, China achieved the great transformation from a millennia-old feudal autocracy to a people’s democracy. In the socialist revolution and construction, China achieved the great transformation from a poor and backward Eastern country with a large population to a socialist country. During the reform and opening up, and socialist modernization, China achieved the tremendous advance of the Chinese nation from standing up to growing prosperous. Following the Party’s 18th National Congress, China has achieved the tremendous transformation from standing up and growing prosperous to becoming strong.”
The third resolution, which was drafted by President Xi Jinping in the footsteps of Mao Zedong and Deng Xiaoping, summarizes “the historic achievements and shifts in the cause of the Party and the country in the new era,” in which the one-China principle plays a major role alongside the strengthening of the country as a major world power.
In this context the CPC intends to “[uphold] the policy of One Country, Two Systems and [promote] national reunification,” the commissioner stressed.
“The Central Committee has adopted a series of measures to address both symptoms and root causes of relevant issues and resolutely implemented the principle that Hong Kong and Macau should be governed by patriots. These moves have helped to restore order in Hong Kong and ensure a turn for the better in the region,” he said, in a reference to the pro-democracy protests in Hong Kong, and the introduction of the National Security Law that led to arrests, trials and the imprisonment of high-profile opposition members.
As for Taiwan, Liu Xianfa was adamant: “We firmly oppose separatist activities seeking ‘Taiwan independence.’ We firmly oppose foreign interference. We have maintained the initiative and ability to steer cross-Strait relations.” PC