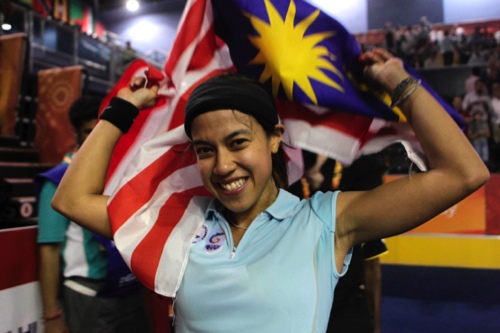 Nicol David hopes she delivered a bit of joy for Malaysia at last. On a squash court more than 6,500 miles (10,000 kilometers) from home, Malaysia’s national sporting icon produced her country’s 50th gold medal in Commonwealth Games history by defending her squash title on Monday.
“Our medals can play a role in bringing a little bit of a boost to our country because we have gone through a tough time these last few months,” David said. “My heart goes out to the families.”
Few have been untouched in Malaysia by the twin airline disasters of 2014.
The country was already struggling to cope with the loss of MH-370 — which vanished after takeoff in March — when Malaysian Airlines suffered its second disaster. Based in Amsterdam, David had flown the same MH-17 route from Schiphol airport to Kuala Lumpur that saw a jet shot down earlier this month over Ukraine.
“A lot of people were concerned because I live in Amsterdam and were worried I was flying back to Malaysia,” she recalled at the Glasgow Games. “I got a lot of messages wanting to know if I was all right, but I was in Amsterdam training and waiting to fly over here.”
Of the 298 MH-17 victims, 43 on the national carrier were Malaysian, including pilot Eugene Choo Jin Leong. Watching David beat world champion Laura Massaro of England on Monday was one of the pilot’s neighbors in Kuala Lumpur.
“It’s such a sad thing,” said Prema Lechumanan, a Malaysian currently studying in Glasgow, who saw a chance to publicly demonstrate pride in the nation by wearing a Malaysia team t-shirt, featuring dazzling tiger stripes, while enthusiastically cheering her hero.
“It’s been really difficult, and her winning this game means a lot because our Malaysian name has not really been talked about nicely the past few weeks,” Lechumanan said. “But now our country can gain back some happiness with her winning this match.”
The 30-year-old David is aware of such expectations, drawing on her resolve to fight back to beat Massaro 12-10, 11-2, 11-5 in a venue packed with English supporters who traveled north of the border.
“It is a tough time for Malaysia and games like this really bring our spirits up,” David said. “We are working together … and we really need something to keep us going. I do think about them at home and I hope they are doing all right.”
At the same time, David doesn’t lose sight of sporting targets and one in particular that will enhance the whole game of squash: securing its place on the Olympic program.
Squash failed in a bid to make the Olympics for the third time in a vote last year, despite presenting itself as a cost-effective, television-friendly sport that can be played at eye-catching locations. David hopes the International Olympic Committee has been taking note of the successful competition in front of raucous crowds at a temporary Glasgow venue.
“It’s such a specular court, with the crowd cheering on from the beginning,” David said. “Hopefully (the IOC) will get a buzz about squash that can hopefully see us through to 2020.”
Having become the first woman to win the Commonwealth single’s title twice, the world’s top-ranked player now wants a third squash gold at the 2018 Games on Australia’s Gold Coast.
“If my body still goes strong and I stay healthy, I would love to play another Commonwealth Games,” David said. AP