Co-organized by the Macau Management Association (MMA) and Galaxy Entertainment Group (GEG), the “GEG Youth Achievement Program” has been providing local youth with personal enhancement and community outreach activities since it was launched in 2011. Now that the third term of the “Youth Achievement Program” has successfully concluded, the organizers held a closing ceremony at StarWorld Hotel this week to present completion certificates and special awards to the participants who performed activities in a distinguished manner, and announced the winners of the Sri Lanka study tour.

“We profoundly understand the immediate need for talent cultivation in various fields as we strive to provide quality training services for local youth. Through organizing a host of community-oriented activities, the program aims to promote the benefits of community involvement to the participants, and encourage them to make contributions using what they have learnt from the program,” said MMA’s council chairman, Tommy Lau, during his speech. Meanwhile, GEG director Philip Cheng said, “I am very delighted to see that the participants have interacted with people from all walks of life, and have learnt more about the city through planning and organizing different community activities. They also gained invaluable knowledge and experience, and developed great friendships with their teammates throughout the program.” 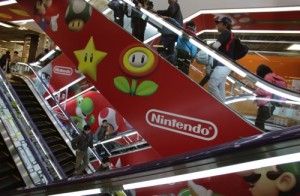 Nintendo Co. sank to a worse-than-expected loss for the fiscal first quarter on lagging Wii U and 3DS video-game machine sales.
But the Japanese company behind Super Mario and Pokemon games stuck to its annual forecasts yesterday for a 20 billion yen (USD196 million) profit on 590 billion yen ($5.8 billion) sales.
Kyoto-based Nintendo reported a 9.92 billion yen ($97.3 million) April-June loss compared with an 8.62 billion yen profit a year earlier.
Quarterly sales totaled 74.695 billion yen ($732.3 million), down 8 percent from a year earlier.
Nintendo has been fighting to maintain profits amid competition from games and social media apps on smartphones and other mobile devices. The company also faces competition from rivals Sony Corp. and Microsoft Corp., which are aggressively pushing their game machines with holiday shoppers.
Nintendo has also faced questions about the health of its president, Satoru Iwata, after he was a no-show at the E3 video-game event in Los Angeles last month.
Last month, in a letter online to shareholders, he said he would miss the annual shareholders’ meeting as well and said for the first time that he had surgery for a bile-duct “growth,” found during a routine health checkup.
“I have already resumed my business by email and by other means, but it is anticipated that a little more time is needed for me to return to my regular work schedule,” Iwata said in the letter.