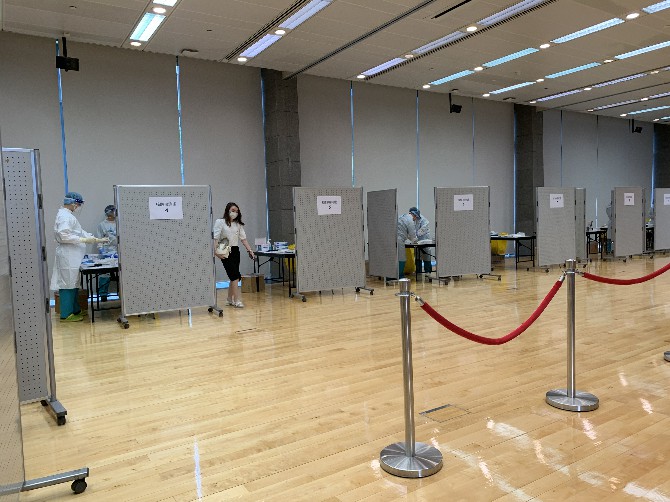 All 29 members of Hou Kong Middle School who engaged in dance-related activities in Xi’an in late July have tested negative for Covid-19 for the first round of sampling. These students were fellow travelers with the 12-year-old girl who caught the Delta variant on a flight from Zhuhai to Xi’an on July 19 during the trip.
Of those in contact with the girl, 19 members and a mainland tour guide are now in Macau, with 18 of them having tested negative for serology tests. The remaining two members tested positive for serology tests but were diagnosed as “normal reaction after vaccination”, Leong Iek Hou, coordinator at the Center for Disease Control and Prevention said yesterday.
Another 10 members are currently in either the mainland or Hong Kong. They have also tested negative for Covid-19, according to the relevant city governments.
The news, announced at the Covid-19 briefing yesterday, came as a slight relief amid the greatest turmoil since Macau’s citywide lockdown last year.
Ever since a family of four tested positive for coronavirus on Tuesday, local residents and cross-border workers were dashing around town for groceries, for Covid-19 tests, or waiting for a whole night at control points just to go back home.
The government earlier identified 72 people and other 328 people as “Close Contacts” and “Secondary Close Contacts” with the affected family. All of them also tested negative, director of the Health Bureau (SSM) Alvis Lo confirmed.

Travel Advisory by DSEDJ
During the briefing, a reporter questioned authorities as to whether the Education and Youth Development Bureau (DSEDJ) gave detailed guidelines to local schools regarding education-related outbound trips during the pandemic prior to the emergence of the four cases.
In response, a DSEDJ representative said that the bureau issued an appeal to institutions across Macau on June 8, advising them to cancel all outbound trips to medium and high-risk areas in the mainland. However, they are not restricted to travel to other areas in China classified as less risky.
Since the cases were reported, the DSEDJ issued a travel advisory to all schools to suspend all activities and outbound trips from August 4 onwards.
The DSEDJ also vows to continue to communicate with schools and help raise awareness towards similar activities among all local schools.

School’s Handling
Many locals also doubt whether teachers of Hou Kong Middle School discovered the symptoms of the 12-year-old girl during the trip and, if so, reported the problem to doctors. A proper handling of the situation could have precluded the entire incident from happening.
On this matter, Leong confirmed that the girl had not mentioned any details of her health status to teachers, as she thought a slight cough and dry throat during the trip were caused by environmental factors.
Authorities called on the public to be considerate and forgiving as she is only a “little girl,” who is not mature and informative enough to fathom the severe implications of the symptoms.
The girl experienced a loss of taste and smell. However, Leong explained that this is a medical concept hard to understand for children. To the girl, the symptoms — albeit obvious to many others — came across as an increased craving for strong-flavored food.
Since the family were found to be positive, hate speech against them has circulated online. Lo urged all locals to stop the condemnations as the girl and her family, who were the “victims” of this unpredictable pandemic. None of them would have thought the daughter would catch the Delta variant during the trip.

Doctor’s misconduct
It was found that the girl’s brother, after developing symptoms, went to the Centro Hospitalar Conde de São Januário to seek emergency medical treatment on July 28, but the doctor did not ask him to undergo a Covid-19 test.
In June, SSM made an amendment to the anti-pandemic measure which clearly stipulates that doctors must conduct nucleic acid testing on every person, even those deemed low risks, as long as they have a fever without a known reason.
In the preliminary investigation, the doctor in charge did not require the boy to undergo a Covid-19 test, as he had no outbound travel history and had no contact with a confirmed case, which put him under the “low-risk” group.
The authorities yesterday confirmed that the doctor did not follow the required protocols and vowed that they will conduct an in-depth investigation into the case, which is classified as misconduct.
Leong also clarified that the girl’s family went to the Federal Restaurant before their daughter came back to Macau, instead of on July 25 as mentioned earlier.

Health Code Glitches
Media also questioned why the health code had not changed from green to blue, as the government stated would occur. The colour change would be used as an indicator to show that an individual has still not yet participated in the massive Covid-19 testing.
Lo stated that the health code had experienced a glitch yesterday morning. Thus, the technicians thought it was best to stay put and not make new changes to the system to avoid further technical faults.
The government also confirmed that the girl’s parents were fully inoculated with the Sinopharm vaccine.
The media also criticized the government that its advice for residents to avoid unnecessary travel is not enough of a deterrent to stop people from traveling during this critical period — which in part led to the emergence of these four cases.

According to the Public Security Police (PSP), Macau saw a sharp fall in cross-border people flows on August 3 — the first day that the government mandated all people leaving Macau to present proof of a negative Covid-19 test result conducted within 24 hours.
The total number of passenger flows stood at 193,700 on August 3, down 39.7% from the previous day.
Of all 117,700 inbound arrivals that day, 39,600 were Macau residents, down 32.1% day-to-day. The other 12,900 were tourists, plunging by 46.1%. The remaining 63,500 were bluecard holders, down 16.6% from the previous day.
Outbound passengers totaled 76,000. Around 30,500 were local residents, representing a huge drop of 46.8%, day-to-day.
FacebookTweetPin
Categories Macau
Share This Post