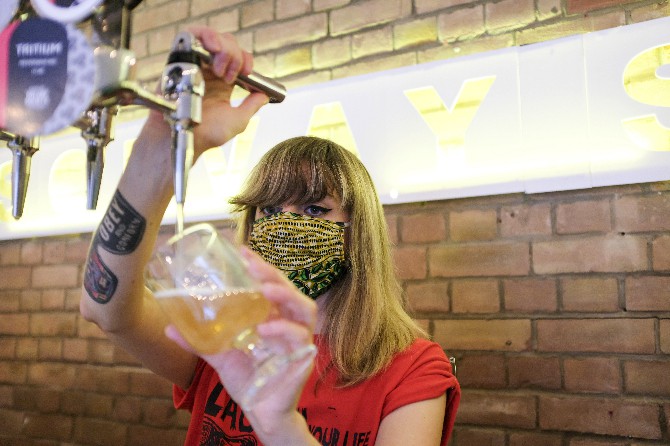 At least two U.S. senators said yesterday [Macau time] that China hid data from the World Health Organization that could have altered the course of the coronavirus outbreak, even as a Chinese official denied delays in sharing information and said the government acted openly and transparently.
They were referring to an Associated Press investigation published this week that found China stalled on providing critical coronavirus information to WHO, which expressed considerable frustration in private even as it praised the country in public. Politicians said the report raised key questions, and public health experts said it shed light on a story that has become highly politicized.
At a press briefing on Wednesday, Zhao Lijian, a spokesman for China’s Ministry of Foreign Affairs, called the AP report “seriously inconsistent with the facts.” He read off a timeline of events that did not contradict the AP’s findings and added that China had always maintained “close and good communication and cooperation with WHO.”
WHO officials refused to answer repeated questions from international journalists about the AP report, but they did not question its accuracy.
Ami Bera, chairman of the U.S. House Foreign Affairs subcommittee that focuses on Asia, acknowledged that WHO was imperfect and said the U.N. health agency should stand up more forcefully to powerful countries like China.
“I do think the WHO has to be very careful in not being so conciliatory to China,” he said.
Senator Rick Scott said that instead of exposing China’s failure to share information, WHO officials praised the country’s response to the coronavirus.
The AP found significant delays by China in the early stages of the coronavirus outbreak that compromised the WHO’s understanding of how the disease was spreading, according to internal recordings of WHO meetings, documents and interviews. The AP uncovered evidence that China sat on releasing the genome of the virus for more than a week after three government labs had fully decoded it.
The recordings of meetings throughout January obtained by the AP showed the WHO was kept largely in the dark, while its public commendations of China were likely aimed at trying to coax more information out of officials.
Director-General Tedros Adhanom Ghebreyesus praised the Chinese response in public as “very impressive, and beyond words.”
Zhao said he was unfamiliar with the internal information cited by AP. But he said “the facts and data are in plain sight” and that China acted “with openness, transparency and a sense of responsibility.” He did not directly address the comments made by WHO officials in the recordings.
Canadian Prime Minister Justin Trudeau said AP’s reporting raised critical issues about how the outbreak was handled.
“I think there are many questions that need to be asked about the World Health Organization, about China and other countries’ behaviors through this,” Trudeau said. “The World Health Organization remains a truly important ally…but there are many questions that need to be answered going forward.”
At the White House, a senior Trump administration official maintained that China pressured the WHO to mislead the world when the virus first emerged.
“The WHO’s complicity with China to cover up the source of the virus violated the organization’s own regulations,” the White House staffer said.
The WHO declared the coronavirus outbreak to be a global emergency on January 30, its highest level of alert. Numerous Western countries, including the United States, did not make serious preparations for the virus’ arrival for months.
In recent weeks, U.S. President Donald Trump has repeatedly blasted the WHO for allegedly colluding with China to hide the extent of the outbreak, saying the U.S. would be cutting its ties with the organization.
The new information uncovered by the AP does not support the narrative of either China or the U.S., but instead portrays an agency urgently trying to solicit more data despite limited authority.
In one internal meeting, the WHO’s top China representative acknowledged the country was only providing outbreak information with the U.N. health agency about 15 minutes before it appeared on state-owned China Central Television.
Several British Conservative politicians known for their hawkish views on China also cited the AP story.
In a tweet, former Cabinet minister Owen Paterson tweeted called it a “shocking report.” Paterson noted the finding that in the week after three Chinese government labs and one commercial lab had all sequenced the virus but could not share it publicly, 600 more people were infected.
Suerie Moon, a global health academic at the Graduate Institute of International and Development Studies in Geneva, called the AP report “a huge public service in uncovering what happened in January.”
“It does show the Chinese government is a powerful stakeholder in WHO,” said Moon, who sat on an independent panel evaluating the WHO’s flawed response to the 2014-16 Ebola outbreak in West Africa.
“I do think Tedros’ praise was excessive,” Moon said. “But there was a clear objective behind it.” AP