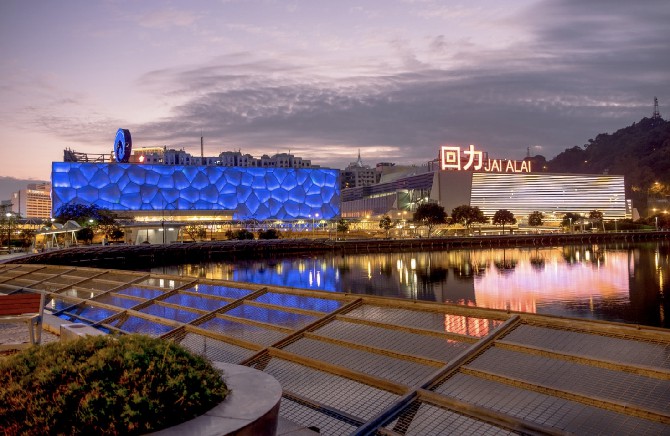 The 72nd Covid-19 patient did not walk into too many areas of the Sands Macao Hotel; so it poses less risk than the Oceanus Casino, public health doctor Leong Iek Hou, coordinator of the Center for Disease Control and Prevention, said.
The patient is a non-resident worker from mainland China who is now quarantined at the Public Health Clinical Center in Coloane. As confirmed by the Health Bureau (SSM), he has only mild symptoms or possibly none at all.
At yesterday’s regular health press briefing, Leong was asked by several journalists, including one from the Times, to justify the authorities’ decision not to cordon off the Sands Macao Hotel, in which the patient had stayed for accommodation.
In contrast, the Grand Emperor Hotel and the Victoria Hotel, both of which had accommodated the patient prior to his testing positive for the virus, were cordoned off and identified as red zones, meaning that no one is allowed to leave.
Meanwhile, the Oceanus Casino, where he gambled, is closed for sanitization.
In response, Leong stressed that the patient, though staying at the Sands, stayed only in his own hotel room. “He has not used any facilities in the hotel,” Leong said.
However, unlike his behavior at the Sands, he spent several hours gambling in the casino. “Considering his interactions with others, among other factors, we did our evaluation [based] on his risks,” Leong said, hinting that there was higher risk of infection at the Oceanus than the Sands.
The 72nd case was detected after the man took a SARS-CoV-2 polymerase chain reaction (PCR) test at the private Kiang Wu Hospital. The sample collection venue was then suspended for cleaning and has now reopened.
Explaining this, Leong said that it has been the practice adopted by the government. Once a venue has been sanitized, it can reopen. “However, whether or not to run operations is the decision of the operators,” Leong added.
Based on this, a journalist wanted to know why the same procedure did not apply to the Grand Emperor Hotel and the Victoria Hotel.
“The patient stayed in the Grand Emperor and the Victoria for a relatively longer period,” Leong explained. “In addition, the period when he stayed at these two hotels was closer to his onset.”
She added that not all individuals in the two hotels were put under lockdown. After epidemiologist inspections, some individuals proven to have not interacted with the patient were released, albeit with health codes turned to yellow, implying the need for health self-management.
“We handle different venues with different tactics,” Leong added.

66th, 74th patients
travel on same bus
The Health Bureau’s (SSM) epidemiological inspections have discovered connections between the city’s 66th and 74th Covid-19 patients, Leong said.
During investigations attempting to find possible links between the city’s recent two outbreaks, involving six security guards and four property renovation workers, the SSM made an unexpected but unsurprising discovery.
On September 24, the 66th and 74th patients, both before their onset of symptoms, traveled on the same shift of bus.
“After reviewing bus surveillance camera footage, we discovered that the two patients stood close to each other,” Leong disclosed. “They have even touched the same handrail on the bus.”
They took bus route 25 with plate number MX-45-51. The 74th patient boarded the bus at 6:02 p.m. at the Sunny View Garden bus stop on Avenida do Colonel Mesquita; the 66th patient at 6:08 p.m. at the Victory Garden bus stop on Avenida do Sidónio Pais.
The 66th patient then alighted the bus at 6:29 p.m. at the Chun Leong Building bus stop in Taipa, while the 74th patient alighted at 6:56 p.m. at the Seac Pai Van Park bus stop.
Although they have been in the same space, the relation of the bus trip to the infections cannot be fully confirmed, according to the public health doctor.
The public laboratory, meanwhile, has run a comparison of the DNA patterns of the virus samples collected on the 72nd, the 64th to 66th and the 68th to 71st patients. The patterns of these Delta-variant samples are identical, meaning that the virus has the same source genetically.
With this information revealed, it can be seen that the 74th patient was overlooked in the epidemiological investigations.
Leong attributed the omission to the daily number of bus passengers in Macau. “I believe most of us have taken the bus in Macau. There are a lot of people,” she said. “During the tracing of the 65th and 66th patients, we have been faced with [a list containing] several thousands of people.”
Leong disagrees with the opinion that the government surveillance system will be able to spot all passengers, “especially when most people wear face masks now.” She also disagrees that the government surveillance camera system is the “best” way to identify all passengers at risk.
Rather, she hinted at other methods which could be used, such as the identity-verified bus card and movement registration app.
However, both methods have been called into question by some technical professionals with concerns about the potential leakage of personal data should the database be subject to cyber-attack.