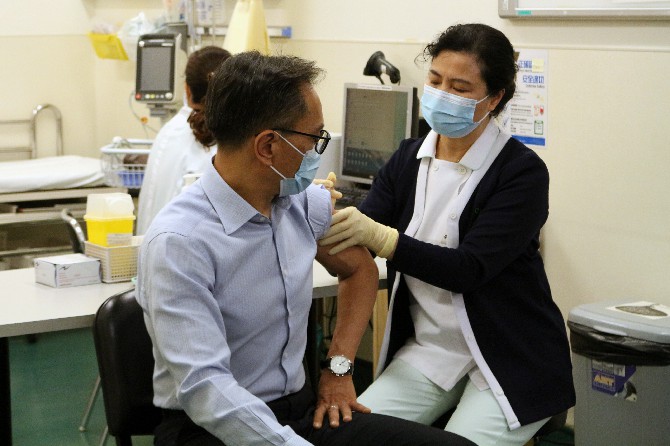 People between ages 40 and 49 years old are accountable for 66.4% of all local inoculations with Covid-19 vaccines, statistics released by the Novel Coronavirus Response and Coordination Center show.
According to the release — which provides a status update on the inoculation plan that began about six months ago — the current total vaccination rate is 40%, and the government’s vaccination target population, people aged 12 and older, has reached 45%.
The age groups of 20 to 29 years and 30 to 39 years are currently vaccinated at rates of 56.6% and 61.3%, respectively, well above the general vaccination rate.
Also positive is the percentage of people aged 50 to 59 years, 44.4% of whom are inoculated.
Only the groups which the health authorities did not initially target are at a low percentage of vaccination, such as youngsters aged between 12 to 19 years and senior citizens above 60 years.
Nonetheless, the 60 to 69 year-old bracket has reached a rate of 19.6%, while the younger group has a current rate of 17.2%.
Health officials have said that the current vaccination rate for both the younger and older groups of people is seriously low, prompting the government to take action to increase their vaccination rate to match the rest of the populace.
The health authorities added that they will target these groups by vaccinating in high schools, and actively pushing to vaccinate the elderly and other people in the community that suffer from chronic diseases. One of the measures they will take is to facilitate the vaccination process for people aged 60 or above by allowing them to be vaccinated without the need for an appointment.
For those with chronic illnesses, the Health Bureau (SSM) is considering a similar system, given a medical evaluation is conducted by a physician that knows the person’s medical record. This is expected to be done upon request with their physician during a regular follow-up visit for outpatient consultation.
The health authorities also noted that, among those vaccinated, there is now a closer balance between residents and non-residents, with the residents representing 55%, while the non-residents (including workers, students, and former stranded non-resident workers) accounting for the remaining 45%.
The vaccination of non-residents has seen a significant surge following the government’s outreach programs, which have reached the gaming concessionaires and allowed workers and their families to be vaccinated at their workplace.
As of 4 p.m. yesterday, 484,119 doses of the vaccine were administered to a total of 276,654 people. Of these, 67,483 people have had their first dose of the vaccine, while 209,171 people completed both vaccines.
Health authorities have reported so far just 2,070 adverse effects following immunization (AEFI), of which 2,064 were mild, and only six were considered serious AEFI.

Mass Covid-19 testing conducted amongst the whole local population can happen at any moment now, Dr. Tai Wa Hou said during the health authorities briefing on Covid-19 in Macau last Friday. Tai is the Medical Director from the Conde de São Januário Hospital Center and Coordinator of the Health Bureau’s (SSM) Covid-19 Vaccination Operation.
When asked if the discovery of four close contacts with a Covid-19 patient in Zhongshan would finally prompt a mass nucleic acid test (NAT) to the population, Tai said that if the authorities find it necessary to perform such a task, they are already prepared for “this work [to] be carried out at any time”.
The health official explained that all related procedures, such as the training of sufficient staff, materials, and equipment, have been already pre-arranged and are ready to be deployed if necessary.
Tai reaffirmed that authorities do not have a specific timetable for launching this program, as it would ultimately depend on current the pandemic situation and the principle of prevention and control by areas, as well as dynamic analysis of the impact of the epidemic and ongoing risk assessment. RM