‘COW’ needs no words to convey one animal’s life 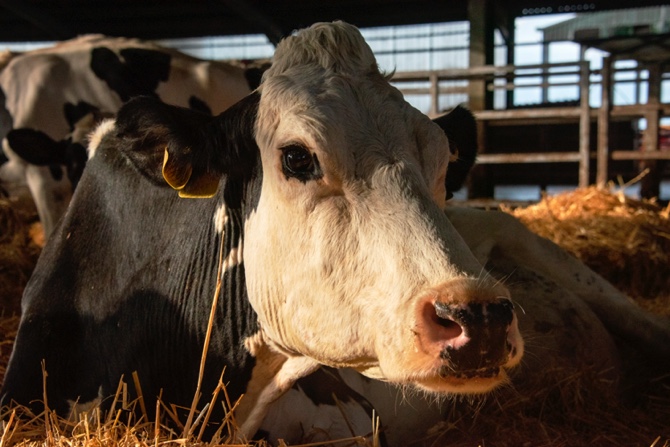 Luma, the cow, in a scene from the documentary “Cow”

The human voice, a necessity in virtually any film, is barely existent and wholly secondary in “COW.” We hear only random bits of conversation, muffled and unimportant, from people we don’t know and don’t need to.

The only character that counts in Andrea Arnold’s deeply moving documentary about the life cycle of one dairy cow is Luma, the cow. Thanks to her expressive sounds and soulful eyes — which we both see, and see through — we sense what it must feel like to be her, a creature whose only purpose is to provide milk, mate and procreate. In Arnold’s careful, unhurried hands, it is a sobering lesson, though one without a clear agenda. Arnold simply seems interested in telling us Luma’s story. And that is enough.

It should be noted that the humans in “COW,” workers on a British dairy farm, hardly seem evil. They are, in fact, amiable and fairly humane as they spend their days milking the cows with mechanized nozzles, guiding them into and out of endless metal cages and contraptions, stapling tags on their ears, making sure they mate, supervising their births. It is the entire enterprise that’s examined here. We all knew it existed. Most of us just hadn’t sat down and watched it play out for 94 minutes.

We begin with what would seem, initially, a heartwarming scene: the birth of a calf. The newborn is pulled from Luma in extreme closeup (and total silence), glistening in afterbirth. Gently, Luma licks her baby clean.

It’s a thrilling sight — and a deceptive one. The two are almost immediately separated, the calf taken to a different part of the farm. Luma seems later to be looking for her. The baby is fed through a plastic contraption. Mother’s milk? That’s for our coffee.

Arnold goes on to depict a life of endless mud and metal and machinery. We watch as one contraption raises the cow in the air sideways so the hooves can be trimmed. We also witness a mating session, which provides Arnold with a chance to inject a note of humor, via pop music — “All night give me mad love,” go the lyrics of “Mad Love” by Mabel — and a shot of fireworks at the conclusion.

But short of this, neither humor nor wit plays a role here. Seen from Luma’s perspective, it’s an unending slog of milking and breeding, since dairy cows must always be lactating. A visit from the doctor who checks out her reproductive organs and says she’s “doing pretty well!” seems more sinister in this context. Soon she can mate and give birth again to a calf that will be taken, again.

Arnold’s editing choices make for a disorienting experience at times, and surely this is intentional. We imagine Luma must often wonder where she is going and why she is being moved, and so we wonder, too.

“This film is an endeavor to consider cows,” Arnold says in a statement accompanying her film. “To move us closer to them … not in a romantic way but in a real way. It’s a film about one dairy cow’s reality and acknowledging her great service to us.”

In other words, the film aims less to condemn than to educate, and even more to appreciate. Never is that message more profound than at the film’s stunningly abrupt ending, which we will not describe here.

“When I look at Luma, our cow, I see the whole world in her,” Arnold says. Her vision comes through, poignantly, in a simple but sobering film that may stay with you for a long time. However you may feel about that cow’s milk in your coffee.