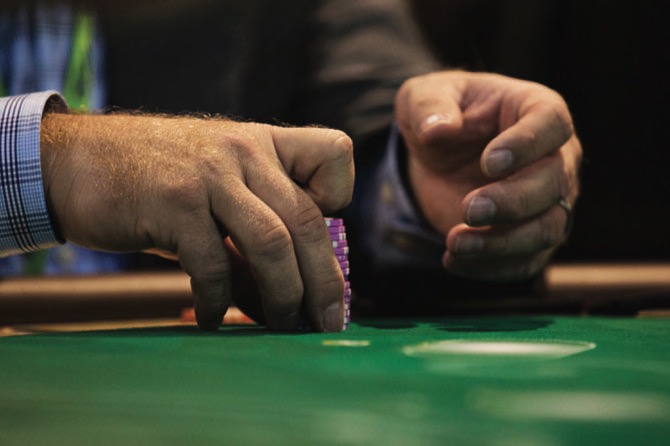 The Judiciary Police (PJ) announced at a press conference last week that the man who stole almost HKD48 million in gaming chips from the VIP room of a casino in the Novos Aterros do Porto Exterior (NAPE) area has been arrested together with another suspect.

The man who stole the chips, surnamed Lei, is a 49-year-old dealer at the casino VIP room. The second suspect is Lei’s uncle, a 70-year-old security guard surnamed Ho. Both men are Macau residents.

At 7 a.m. on January 16, the VIP room where Lei was working was empty save for another female dealer. Lei ordered his colleague to be silent and lean over her table, after which he removed all the chips from his own table and left the premises.

Some media reports suggested that Lei threatened his colleague with a knife in order to ensure her compliance. However, Macau police authorities have refuted these suggestions, which do not align with their own account of the crime, and said that there was no weapon used in the heist.

The PJ later found Lei’s motorcycle in the Rua da Praia do Manduco district, and at 6 p.m. on January 18, Ho and Lei were caught meeting at a garden in the Taipa district.

Lei admitted guilt but refused to reveal the whereabouts of the chips. He claimed that he had committed the crime to settle a personal debt, and that he has had a gambling habit since his teens.

Ho denied involvement in the robbery.

The two suspects have been charged with robbery and transferred to the Prosecutions Office. The PJ has not ruled out the possibility of other individuals’ involvement.

According to the PJ, no chips from this batch have been exchanged. Nevertheless, all of the missing chips are unmarked and could be exchanged for cash.

Thefts from VIP rooms or junket operators are not unheard of in Macau.

In 2015, an unidentified junket operator was reported to have lost HKD1.2 million to a VIP room low-level scam. In the following year, SJM Holdings confirmed that a junket company operating at L’Arc Macau had been the victim of an alleged theft amounting to HKD99.7 million.

Croupiers and junket account managers have been thought on several occasions to be behind the thefts. JZ/DB

THREE PEOPLE were charged with the violation of confidential judiciary material after they shared an official investigation document for one of the suspects, Lei, on social media. The document in question was leaked by the casino security and surveillance departments, according to the Chinese press. Following the robbery, the PJ issued an “Important Searching” notice to the casino security and surveillance departments, calling for their assistance in catching the dealer.  The notice, which included a photo of the dealer and some of his personal details, was considered a confidential document, however the PJ later discovered that the notice had been published online. The PJ arrested a 51-year-old male administrative employee and two female dealers aged 34 and 54.