CRISIS RESPONSE | For Obama, Ebola one day, Islamic threat the next 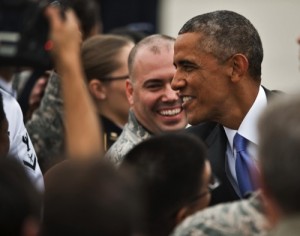 President Obama, right, greets military personnel as he arrives at MacDill Air Force Base for meetings at Central Command

President Barack Obama is consulting with military officials about the U.S. campaign against Islamic State fighters, just a day after boosting the U.S. response to the Ebola outbreak in West Africa — seeking to show resolve on two distinct threats that are costing lives and threatening world stability.
Obama is spending two days away from Washington to meet with the generals and the scientists charged with carrying out missions against two crises.
Yesterday, Obama planned to visit U.S. Central Command in Tampa, which oversees U.S. military efforts in the Middle East. The visit comes at a sensitive time in the planning against Islamic State militants, with a number of Western and Arab allies struggling to determine how to assist in the fight.
The president is then returning to the capital for a meeting today with Ukrainian President Petro Poroshenko, drawing attention to tensions with Russia in yet another foreign caldron.
In three high-profile days, Obama is seeking to counter lingering questions about how quickly he has responded to crises and whether his deliberative approach has allowed military, diplomatic and public health hot spots to flare up.
Yesterday’s appearance at Central Command came as Congress, in rare accelerated fashion, prepared to vote on Obama’s request for authority to equip and train Syrian opposition fighters whom the administration deems as moderates in the Syrian civil war. Obama, determined not to deploy U.S. combat troops against Islamic State fighters, wants to use U.S. military airstrikes to weaken the extremists and rely on Iraqi and Kurdish forces and the Syrian opposition to carry out the fight on the ground.
The nation’s top military official, Army Gen. Martin Dempsey, introduced a qualification to Obama’s plan, telling Congress on Tuesday that if it became necessary for U.S. military advisers to accompany Iraqi troops into combat he might “go back to the president and make a recommendation that may include the use of ground forces.” Dempsey stressed that he didn’t believe such a step was necessary now.
The White House, however, remained firm about Obama’s view. “What he’s been very specific and precise about is that he will not deploy ground troops in a combat role into Iraq or Syria,” White House spokesman Josh Earnest said in response to Dempsey’s comments.
In Tampa, Obama planned to meet with Gen. Lloyd Austin, who will oversee the military campaign against the Islamic State group as the head of Central Command, and other military officers to discuss operational details about the mission. He also planned to meet with representatives from the countries that fall within the responsibility of the Central Command to highlight his desire for an international coalition to take on the fight.
Defense Secretary Chuck Hagel was expected to join Obama, who was scheduled to make public remarks following his consultations.
While one is distinctly military and the other medical, Obama’s challenges in the Middle East and in Africa bear certain uncanny similarities. In both instances he has been accused of being slow to recognize a threat, and now he is responding with ramped-up efforts in both cases. He also has been pressured to offer reassurances that the primary threat rests in the Middle East and in Africa and that the risks from the militants and the virus to the United States are low.
Still, he has described the danger both present in stark terms.
Islamic State fighters are “unique in their brutality,” he said last week as he made references to slayings of prisoners, enslavement and rape of women and the beheadings of two American journalists. Likewise, Ebola, he declared, is now an epidemic “of the likes that we have not seen before.”
“It’s spiraling out of control. It is getting worse. It’s spreading faster and exponentially,” he said.
In both cases he has issued a call for international action, warning that the threat of regional instability could spread. Jim Kuhnhenn, Tampa, AP