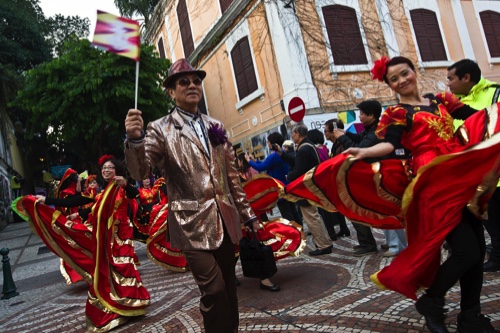 The former president of the Cultural Institute Carlos Marreiros praised the “substantial steps” taken by Macau in the creative industries sector, as well as the investments in creating brands “made in Macau”.
According to the Macanese architect, the government has been active in promoting cultural activities and viewing the creative industries as a part of path taken to achieve greater economic diversification in the region.
Mr Marreiros, who is a member of the local Cultural Heritage Committee, stated that there is high potential for locally made creative products, since the consumer market for these products is “very vast” in the Pearl River Delta Region.
The Cultural Institute (IC) President Ung Vai Meng highlighted the support given by public entities for cultural events and scholarships facilitating the training of artists. Ung Vai Meng also mentioned that the IC has been supporting the making of movies and music albums by local artists.
Ung Vai Meng says there’s a new event joining the list of the main cultural events held in town:  the “Parade Through Macau, Latin City” held last week debuted on the list along with the Macau Arts Festival and the International Music Festival.
According to the Cultural Institute President, the parade constitutes “the biggest outdoor festival in Macau,” and “an important link for cultural exchanges” that contributes to “the creation of a local artistic elite”.
Another major event in Macau’s cultural calendar – the Macau Arts Festival – has also been growing as a “platform to showcase local shows,” says Ung Vai Meng.
On a more international scale, the Music Festival is defined by the IC head as “an event with big relevance locally and even in Asia”. Overall, the institute’s aim is “to use culture in order to enhance the city’s soul, transforming Macau into a culturally sustainable city”. MDT/Lusa