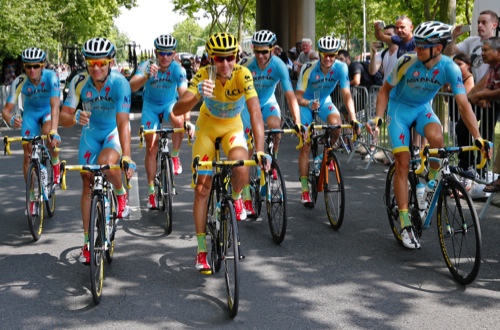 As a teenager, Vincenzo Nibali uprooted himself from his home in Sicily to head for Tuscany — and a career on a bike.
Off to join a cycling program and move in with another family, Nibali left behind the video and photo shop of his father, a cycling fan, where the boy whiled away many hours watching footage of riders like Italian greats Felice Gimoni, Giuseppi Saronni and Francesco Moser.
He left behind his grandfather, an Italian who once immigrated to Australia then returned to Sicily to build a big house. Nibali reportedly said he cannot really speak much with his proud grandfather about his Tour de France these days: He cries too much.
“I have made a lot of sacrifices,” he said. “I left my family when I was 15 years old.”
Those sacrifices paid off in full yesterday (Macau time), when the boy from Messina ascended the Tour winner’s podium after an opportunistic, level-headed and savvy ride over three weeks to earn the most prized honor in professional road cycling on the Champs-Elysees.
Humble and serene, Nibali has given Italy what some call the antithesis of its last Tour champion: flashy and flamboyant Marco Pantini — the Pirate — who was celebrated as a national hero after his 1998 victory. Pantani’s life came to a tragic end in 2004 in a drug overdose. Nibali watched and respected his predecessor as a rider.
“I grew up watching Pantani and many other riders on TV,” Nibali said at one of the many post-race news conferences he attended during this Tour. “My father was a big fan and used to tape races. He also had documentaries and the one I liked best was of Francesco Moser, because of his innovative style.”
The yellow jersey wearer typically speaks to reporters after each stage: Nibali wore it for 19 of the Tour’s 21.
His style is soft-spoken, unflappable — even in the face of inevitable questions about doping, which pummeled this sport’s image long before Lance Armstrong dealt arguably the most devastating blow: His admission that he doped on way to his seven Tour victories, which were later stripped from him.
“Don’t compare me to Armstrong,” Nibali said, calling himself a “flag-bearer of anti-doping.”
Unlike the American, who focused primarily on cycling’s biggest show, and generally would dominate the field and then micro-manage his lead, Nibali competes in one-day “classic” races as much as the big events and likes to attack: He’s known as “The Shark of the Strait” of Messina for a reason.
“I always ride in front in the classics, in attack mode, even when I’m sick,” he said, pressing on with the Armstrong comparison.
Nibali, refusing to simply protect his yellow jersey, burst ahead to win a tough stage at the Hautacam ski station in the 18th stage, padding his overall lead. It evoked memories of Eddy Merckx — who many call cycling’s greatest-ever rider — who attacked while in yellow too. That was the Belgian “Cannibal” at work.
Nibali has now joined five other elite riders who won all of the sport’s biggest races: the Spanish Vuelta, the Giro d’Italia and the Tour.
French sports daily L’Equipe, quoting Nibali’s mother, reported that in an accident while a youth, when he got a gash over an eye and deep slash in a thigh, young Nibali told the doctor to stitch him up well, “because I’m going to be a bicycle racer,” she recalled.
Italian sports newspaper La Gazzetta dello Sport reported that Nibali has a contract with his Astana team through 2016 worth nearly 4 million euros ($5.4 million) per year, and would earn an extra 1 million euros ($1.3 million) bonus for winning this Tour. In an interview with The Associated Press, Kairat Kelimbetov, president of Kazakh Cycling, which supports Astana, declined to comment on private contractual matters.
Such a sum wouldn’t be too bad for a rider who said Saturday, “My parents have two little shops, and one of them is operating at a loss” — noting that many Italians have faced economic turbulence recently.
He stays humble for fans back home, where Prime Minister Matteo Renzi invited Nibali over to celebrate even before he had scaled the final podium in victory.
“I just want people to enjoy it. I don’t think of myself as a legend or a big champion,” Nibali recently told Italian state TV, RAI. “I like to think of myself simply as a cyclist.”
This 101st Tour began in Yorkshire, England, and guided riders over 3,664 kilometers, with high-mountain rides in the Vosges, Alps and Pyrenees. AP