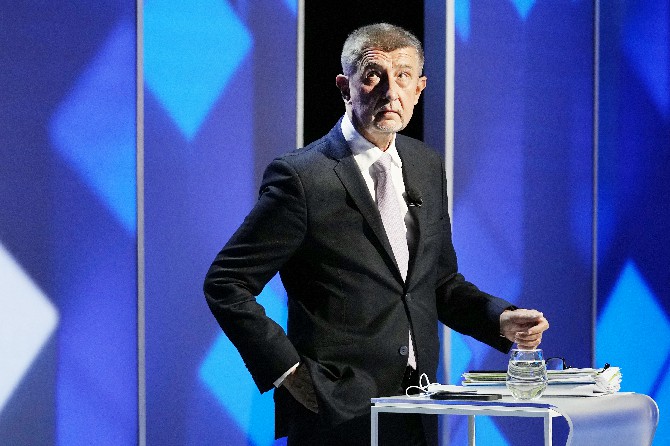 Czech Prime Minister Andrej Babis is heading into a parliamentary election this week hit by yet another scandal that links him and hundreds of other wealthy people to offshore accounts.
Findings by the International Consortium of Investigative Journalists dubbed the “Pandora Papers” shed light on how the elite and the corrupt used offshore accounts to shield their assets from taxes or to hide ill-gotten gains.
Here’s a look at the previously hidden dealings making waves in the Czech Republic and the country’s election taking place on Friday and Saturday:

WHAT DID BABIS DO?
In 2009, Babis, a populist billionaire, put $22 million into shell companies to buy 16 properties in southern France, including a chateau, the investigation found. They were not disclosed in Babis’ required asset declarations, according to documents obtained by the journalism group’s Czech partner, Investigace.cz.
Babis has denied any wrongdoing and alleged that the recent revelation was meant to harm him in the election.
“I don’t own any offshore. I don’t own any property in France,” he said. “It’s nasty, false accusations that are meant to influence the election. That’s all.”
The Czech Republic’s organized crime police unit said it would investigate the situation. The country’s political opposition is demanding that Babis prove his actions were in line with law.

WHAT’S THE POLITICAL SITUATION?
Babis, 67, has had a turbulent term featuring numerous scandals, but all public polls favor his centrist ANO (YES) movement to win the election with about 25% of the vote.
Five opposition parties with policies closer to the European Union’s mainstream have put aside their differences to create two coalitions aimed at ousting the euroskeptic prime minister from power.
Babis has led a minority coalition government of ANO and the leftist Social Democrats with support from the Communists, giving the far-left party an indirect share of power for the first time since 1989. The Communist Party vehemently opposes NATO and maintains friendly ties with the ruling communists in Cuba, China and North Korea.
Both the Social Democrats and the Communists might struggle to win parliamentary seats at all, this time around. The main challenge for Babis’ main challengers is to get united.
The center-right Together coalition consists of the conservative Civic Democratic Party and Christian Democrats and the liberal-conservative TOP 09 party. The liberal Pirate Party and STAN, a group of mayors and independent candidates, formed a center-left coalition.
Each coalition is predicted to win about 20% of the vote.
Despite their differences on many issues, including climate change, same-sex marriage and the adoption of the euro, the opposition parties all support EU and NATO membership.

BABIS’ POPULIST PLEDGE: NO MIGRANTS
Babis has bet on an aggressive campaign, with migration a major topic. He has promised voters that not a single illegal migrant would be allowed to enter the Czech Republic and accused the opposition — with no evidence — of inviting in refugees.
He has also pledged to protect the Czechs from the European Union, which he claims wants to destroy the country’s sovereignty. The EU’s plan to tackle climate change would also harm Czech people’s way of life, Babis has claimed.
Targeting his key supporters, he increased pensions more than required and lowered income taxes amid a record deficit caused by the pandemic, a move that worries economists.
“Babis is trying to divide the society, to create an atmosphere of fear for some of their safety and present himself as the only one to protect them,” Palacky University political scientist Tomas Lebeda said. “It’s a classic strategy used by most populists, by Donald Trump, by (Hungarian Prime Minister) Viktor Orban.”
Babis, who calls Hungary’s nationalist leader his friend, invited Orban to join him at an election rally last week.
“It’s obviously a reason for concern, not just for Europe, but above all for the Czech Republic, given what’s been going on in Hungary,” Lebeda said.
Although Orban is popular in his country, critics accuse him of autocratic tendencies, citing his seizing control of Hungary’s media to control political narratives. Several journalists from the Czech, German and French media were denied access to a news conference Orban and Babis held in the northern city of Usti nad Labem.

A POLITICIAN OFTEN QUESTIONED
The Pandora Papers report is not the first time that Babis’ wealth and business activity have become a political issue since his party won the 2017 election.
A quarter of a million Czechs rallied against him twice in 2019 over his alleged fraud involving EU funds and allegations of his cooperation with the country’s communist-era secret police. The protests were by far the biggest anti-government demonstrations since the country’s 1989 Velvet Revolution.
An EU investigation found that as prime minister Babis had a conflict of interest from his former business empire. When he took office, Czech law required him to transfer his Agrofert conglomerate of around 250 companies into two trust funds, but the EU concluded that he still controls them. The companies include two national newspapers and a popular radio station.
His resolve to run the government as a company was tested by the coronavirus pandemic. Babis went through five health ministers, and the Czech Republic has reported more than 30,400 COVID-19 deaths among a population of 10.7 million. MDT/AP