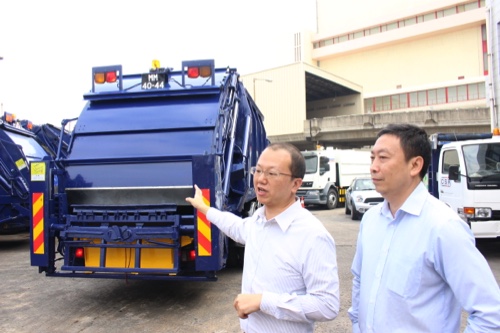 The Macau Waste System Company (CSR) revealed that collected an average of around 940 tons of garbage every day between August and October this year, about 56 tons more per day compared to the same period in 2013.
The average amount of trash gathered per day in August was 954 tons, 66 tons higher than the average a year ago. The figure in October fell slightly to 917. Steve Chan, CSR head of operations, has attributed the growth to rising population and the increase of new businesses opening in Macau. He also explained that the amount of garbage usually rises during summer because of the surge in visitor arrivals. He said that another peak of trash collection is usually during the period approaching Chinese New Year when people will traditionally carry out a thorough cleaning of their homes.
Moreover, Chan said that they have encountered more irregularities in terms of garbage disposal in these two years. He said that materials used in house revamps and the waste generated is often seen being disposed of next to garbage bins. Oversized domestic furniture is frequently found abandoned on the streets as well. The head of operations said that these illegal disposals added a considerable amount to CSR’s workload and will affect other road users. The head of operations recommended that people either ask furniture stores to handle unwanted old furniture or that they bring it directly to the Macau Solid Waste Incineration Plant in Taipa.
Meanwhile, CSR announced yesterday that it would introduce a total of 46 vehicles in the coming year to provide services such as garbage collection. More than 90 percent of those vehicles will meet the European emission standard 5 EEV (enhanced environmentally friendly vehicle).
CSR was awarded Macau’s sole waste management concession contract again, starting April this year. Mr Chan said that, according to the content of the bid documents the company tendered for the current 10-year concession, CSR would spend around MOP50 million in the first year of the contract to procure new equipment and vehicles.
Hong Cheong Fai, CSR’s general manager, said that apart from choosing vehicles with a higher emission standard, the waste management concessionaire has already bought new garbage trucks that generate less noise during operation. Since the new trucks can perform the same task as the old ones with a lower motor revolution speed, this is going to reduce the noise during their operation.
Furthermore, in order to mitigate the secondary pollution, CSR has added to some of its garbage trucks a small collector at the back of the vehicles. The collector will catch the smaller size waste that sometimes falls to the ground when the garbage bins are being loaded on the trucks.