This Day in History | 1970 – Hijacked jets destroyed by guerrillas 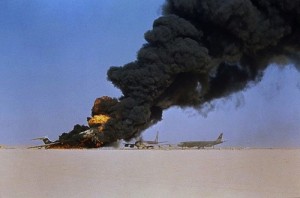 Palestinian militants have blown up the three planes they have been holding at an airfield in the Jordanian desert. The 40 hostages were taken from the planes minutes before the explosions destroyed the grounded jets.
Two of the planes had been captured by the Popular Front for the Liberation of Palestine (PFLP) six days ago. The last plane was seized on 9 September on a flight from Bombay to London and forced to join the others at Dawson’s Field airstrip – a former RAF base.
A spokesman for the PFLP said the destruction of the planes at 1530 local time (1430 GMT) was the first step of their warning to the governments of Switzerland, Britain and Germany.
The radical Palestinian faction had issued a 72-hour deadline for the release of seven militants being held by the three countries. They include Leila Khaled who was arrested at London Heathrow after attempting to hijack an El Al jet on 6 September.
But the rebels said they had blown up the airliners before the deadline had passed because they believed they were about to be attacked. “It was clear there was a plan to foil our seizure of the planes by imperialistic agents – therefore we blew them up,” a spokesman said.
Members of the Popular Front freed the majority of the hostages – mainly women and children – on 11 September and took them to the nearby Jordanian capital, Amman.
But they moved 40 hostages to a secret location – 35 men and five women whom they said were members of the Israeli army and therefore “prisoners-of-war”. “If our demands are not met we will not release them – but there will be no reprisals and we will treat them well,” a PFLP statement said.

A period of tense negotiation followed the blowing up of the three airliners.
The liberation of the remaining hostages hinged on the release of the captured PFLP militant being held in the UK, Leila Khaled, and six other Palestinian guerrillas being held in Switzerland and Germany.
The UK Government faced the dilemma of releasing Ms Khaled – and risk being accused of giving in to terrorism by Israel and the United States – or endangering the lives of the British hostages.
But all the Palestinian dissidents were released on 30 September and the remaining hostages were freed unharmed.