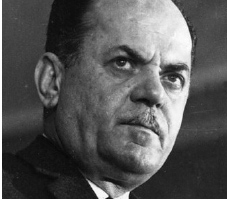 The Greek Government has been toppled by the country’s armed forces after weeks of unrest.
There appears to have been little or no resistance when tanks rolled into Athens and troops took up positions around government buildings shortly before dawn.
The coup was orchestrated by the head of the feared military police, Brigadier Demetrios Ioannidis.
It follows growing unrest in Greece, and comes eight days after student uprisings in which 13 people died and hundreds were injured.
The former Greek leader and self-appointed President, George Papadopoulos, is thought to be under heavy guard at his seaside villa 20 miles from the capital.
He himself came to power in a military coup six years ago. Since then he has headed a regime characterised by repression and brutality.
No air of tension was reported in Athens after the coup and exiled Greek publisher Helen Vlachos told the BBC in London the former president would not be missed.
“I don’t think anyone was so bitterly hated – he humiliated the Greek people,” she said. Lieutenant-General Phaedon Gizikis, commander of the First Army, has been sworn in as his successor.
In a broadcast to the nation this evening, he said he nursed no personal ambition and accepted the mandate of the armed forces.
“My only ambition is to contribute to the normal operation of the regime, as well as the consolidation of tranquillity and unity among the Greek people,” he said.
Soon after the coup all telephone services were suspended. Athens International Airport was closed but reopened after a few hours.
A curfew was also imposed but is due to be lifted tomorrow morning.
A military communiqué announced the overthrow of the government was supported by the army, navy and air force and said it was a “continuation of the revolution of 1967”, when the Greek colonels, headed by Mr Papadopoulos, seized control.
The statement went on to accuse Mr Papadopoulos of “straying from the ideals of the 1967 revolution” and “pushing the country towards parliamentary rule too quickly”.
Earlier this year, Mr Papadopoulos declared Greece a republic, abolishing the monarchy and declaring himself president.

Brigadier Ioannidis partially restored civilian rule but retained a large measure of power.
His regime lasted only a few months, collapsing in 1974 after provoking an unsuccessful coup attempt in Cyprus which led to the Turkish invasion of the island.
He was charged with high treason and revolt and jailed for life.
Exiled former Prime Minister Constantine Karamanlis was recalled to the country to head the new government.
A referendum rejected the restoration of the monarchy and instead a parliamentary republic was formed.
Karamanlis was prime minister for six years and was then elected president.
He is credited with guiding the country’s return to democracy and engineering its entry into the European Economic Community in 1980.
Following the restoration of democracy, George Papadopoulos was convicted of treason and sentenced to death by firing squad. This was later commuted to life in prison.
A decision by the government to free him on humanitarian grounds in December 1990 was dropped after a public outcry.
He spent the last three years of his sentence in a prison hospital before dying in June 1999.