This Day in History: 1976 Lauda fights for life after Grand Prix crash 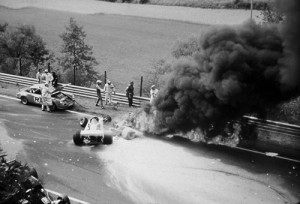 Formula One racing driver Niki Lauda is in a critical condition in hospital after an horrific accident at the Nurburgring Grand Prix in Germany.
The Austrian-born driver became trapped inside his Ferrari after it swerved off the track before bouncing back into the path of the oncoming cars and catching fire.
Fellow driver Guy Edwards managed to avoid the blazing wreckage but Harald Ertl and Brett Lunger both hit it.
All three drivers raced to the burning Ferrari and, with the help of the Italian driver Arturo Merzario, who also stopped, eventually managed to pull 27-year-old Lauda from his vehicle.
Lauda, who has led this drivers’ championship since the beginning of the season, began the race second on the grid behind James Hunt in pole position.
Guy Edwards said they had had problems getting the trapped driver out.
“Lauda was basically sitting in the middle of a fire and I would guess it would be about a minute before we managed to get the belts undone.
“In the meantime Ertl had got a fire extinguisher from somewhere and was aiming it towards the central cockpit area so he was able to keep the fire under some sort of control.”
“Lauda was conscious most of the time and was saying ‘get me out’.”
Mr Lauda was taken to nearby Adenau hospital with serious burns. From there he was flown to the University Hospital in Mannheim where his condition is described as critical.

Within six weeks of the Nurburgring accident Niki Lauda was back behind the wheel. He fought for his life for several days following the accident and suffered horrendous burns to his head and face. Part of one of his ears was burnt off and his tear duct mechanism was severely damaged which affected his vision in subsequent races.
Lauda won the World Championship a total of three times – in 1975, 1977 and 1984. He retired from F1 in 1985. Before the 1976 accident he had been well on course to win it again – but eventually lost by just one point to James Hunt.
At the end of the 1970s he launched his own airline Lauda Air, which was later sold to Austrian Airlines. He managed the Jaguar F1 racing team from 2001-2. In late 2003 he launched another airline, Niki. Guy Edwards was awarded a Queen’s Gallantry Medal for his bravery.