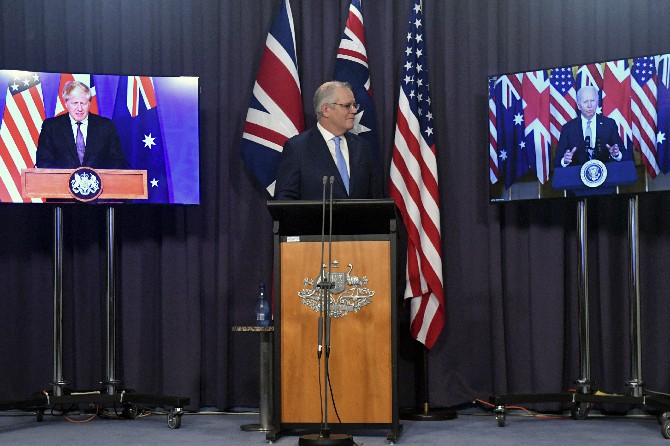 President Joe Biden announced yesterday [Macau time] that the United States is forming a new Indo-Pacific security alliance with Britain and Australia that will allow for greater sharing of defense capabilities — including helping equip Australia with nuclear-powered submarines. It’s a move that could deepen a growing chasm in U.S.-China relations.
Biden made the announcement alongside British Prime Minister Boris Johnson and Australian Prime Minister Scott Morrison, who joined him by video to unveil the new alliance, which will be called AUKUS. The three announced they would quickly turn their attention to developing nuclear-powered submarines for Australia.
“We all recognize the imperative of ensuring peace and stability in the Indo-Pacific over the long term,” said Biden, who said the new alliance reflects a broader trend of key European partners playing a role in the Indo-Pacific. “We need to be able to address both the current strategic environment in the region and how it may evolve.”
None of the leaders mentioned China in their remarks. But the new security alliance is seen as a provocative move by Beijing, which has repeatedly lashed out at Biden as he’s sought to refocus U.S. foreign policy on the Pacific in the early going of his presidency.
China said the alliance would severely damage regional peace and stability, and jeopardize efforts to halt nuclear weapon proliferation. It said it was “highly irresponsible” for the U.S. and Britain to export the nuclear technology, and that Australia was to blame for a breakdown in bilateral relations.
“The most urgent task is for Australia to correctly recognize the reasons for the setbacks in the relations between the two countries, and think carefully whether to treat China as a partner or a threat,” said Zhao Lijian, a spokesperson of China’s Ministry of Foreign Affairs.
Beijing has been unhappy with the Biden administration calling it out over human rights abuses in the Xianjing region, the crackdown on democracy activists in Hong Kong, and cybersecurity breaches. Biden spoke by phone with China’s President Xi Jinping last week. After the call, the official Xinhua News Agency reported that Xi expressed concerns that U.S. government policy toward China has caused “serious difficulties” in relations.
Before the announcement, a senior administration official sought to play down the idea that the alliance was meant to serve as a deterrent against China in the region. The official, who spoke on the condition of anonymity to preview the announcement, said the alliance’s creation was not aimed at any one country, and is about a larger effort to sustain engagement and deterrence in the Indo-Pacific by the three nations.
Johnson said the alliance would allow the three English-speaking maritime democracies to strengthen their bonds and sharpen their focus on an increasingly complicated part of the world.
“We will have a new opportunity to reinforce Britain’s place at the leading edge of science and technology, strengthening our national expertise, and perhaps most significant, the U.K., Australia and the U.S. will be joined even more closely together, “ Johnson said.
The three countries have agreed to share information in areas including artificial intelligence, cyber and underwater defense capabilities.
But plans to support Australia acquiring nuclear-powered submarines are certain to catch Beijing’s attention. To date, the only country that the United States has shared nuclear propulsion technology with is Britain. MDT/AP