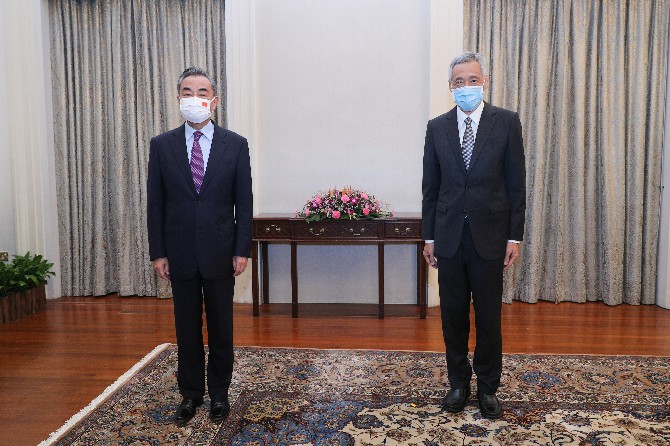 China’s top diplomat met yesterday in Singapore with the wealthy city-state’s prime minister, reaffirming the importance of trade and diplomatic ties between the two countries.
In a Facebook post, Singapore’s Prime Minister Lee Hsien Loong said he had a “productive and candid” discussion with Chinese Foreign Minister Wang Yi covering international and regional developments.
“Singapore welcomes China’s continued contribution in our part of the world, and will continue working with China to build a more harmonious and peaceful world,” Lee wrote.
Singapore’s foreign ministry said in a statement that Wang and Lee also affirmed “the positive momentum in both countries’ cooperation amidst COVID-19.”
Wang is on a week-long official tour, and had visited Vietnam and Cambodia prior to the two-day working trip in Singapore. He is expected to visit South Korea after Singapore.
Wang’s visit comes weeks after U.S. Vice President Kamala Harris visited Southeast Asia and stopped in Singapore and Vietnam. Chinese state media have described Harris’s trip as one that “sought to pit countries against China.”
While in Singapore last month, Harris had criticized China for its actions in the South China Sea, describing them as intimidation and coercion. She said that the U.S. would “stand with our allies and our partners” in the face of Chinese threats.
On Monday, China’s Wang also called on Singapore’s Deputy Prime Minister Heng Swee Keat and Foreign Minister Vivian Balakrishnan.
They discussed further ways to strengthen relations between the two countries, including advancing co-operation with China on Singapore’s government projects and exploring new areas of co-operation such as the digital economy.
Balakrishnan also welcomed China’s interest in the Comprehensive and Progressive Agreement for Trans-Pacific Partnership, which is a free trade agreement between 11 countries that include Australia, Canada, New Zealand, Singapore and Vietnam.
The Chinese Foreign Ministry said last week that the countries that Wang is visiting are close neighbors and important partners. MDT/AP