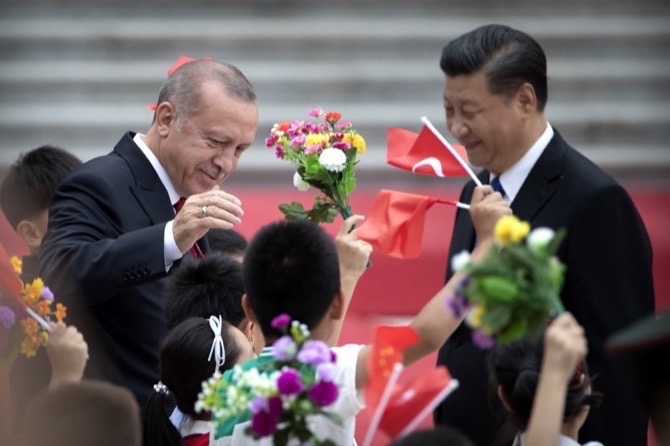 Erdogan told Xi yesterday that Turkey and China have “great potential to grow our relationship” based on historical trading ties, and that the two would “contribute to regional and global stability.”

Xi said China and Turkey should “sincerely work toward upholding a multilateral world order with the United Nations at its core, a system based on international law, focusing on [the development of] science and technology.”

That appeared to be a swipe at the U.S., with which China is locked in a prolonged dispute over tariffs and technology.

Turkey is an important link in China’s trillion-dollar “belt-and-road” initiative to build ports, highways, power plants and other infrastructure linking it to Europe, Africa and Asia. Washington has declined to endorse the program, which critics say risks burdening poor developing countries with massive debts that they will be unable to pay back to Beijing.

Erdogan is also seen as drifting closer to Russia and China despite Turkey’s treaty ties with the U.S. and has stood firm against Washington’s opposition to its decision to purchase Russia’s S-400 missile defense system.

Alone among majority Muslim nations, Turkey has criticized Beijing over its treatment of its Muslim minority groups, although Erdogan did not raise the issue in his opening remarks to Xi before reporters were sent from the room. Turkey’s foreign ministry earlier this year called China’s policies “a great cause of shame for humanity” and said it is “no longer a secret” that China has arbitrarily detained more than a million Turkic Muslim Uighurs in “concentration camps.” AP