Indonesian diplomats have met with a woman arrested in Malaysia for suspected involvement in the killing of the North Korean leader’s half brother and confirmed she is an Indonesian citizen, officials said yesterday.

Authorities have identified her as Siti Aisyah, 25, originally from Serang in Banten, a province that neighbors the Indonesian capital, Jakarta. She was arrested by Malaysian police early yesterday.

Indonesian Immigration Office spokesman Agung Sampurno said that officials from the Indonesian Embassy in Kuala Lumpur met with the woman in Selangor state, where she has been imprisoned, and ensured she was safe.

“They were allowed to see her but cannot make any questions,” said Sampurno. “However, the team can confirm that Aisyah is Indonesian.”

He said a passport ID page published by Indonesian media is “the same as the passport held by her.”

Lalu Muhammad Iqbal, director of Indonesian Citizen Protection at the Foreign Ministry, said Indonesia would ensure Aisyah’s rights are protected and that she has legal assistance.

Malaysian police have now arrested two women and one man in the death of Kim Jong Nam, who was reportedly poisoned on Monday by a pair of female assassins as he waited for a flight at the Kuala Lumpur airport.

Kumparan, an Indonesian news portal, said Aisyah lived in the Tambora neighborhood in western Jakarta for about 10 years before moving to Malaysia in 2013 along with her husband and children. It cited interviews with former neighbors and said she had returned to Indonesia in 2014 to arrange a divorce.

Sampurno said immigration data showed that Aisyah had visited Indonesia earlier this year and returned by ferry to Johor, Malaysia, from the nearby Indonesian island of Batam on Feb. 2.

Several million Indonesians work in Malaysia as maids and construction and plantation workers.

Investigators in Malaysia are trying to shed light on the death of Kim, which has set off set off waves of speculation over whether North Korea dispatched a hit squad to kill him. Niniek Karmini, AP

Minister: ‘I think he has two different identities’ 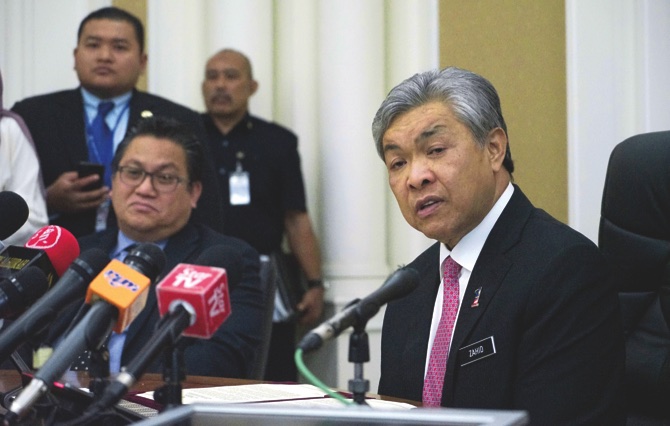 The North Korean who was killed at the Kuala Lumpur International Airport 2 on Monday has been officially confirmed as Kim Jong Nam. Malaysian Deputy Home Minister Zahid Hamidi said the confirmation was made based on the passport held by the victim as well as documents provided by the North Korean Embassy for verification. He also stated that Kim Jong Nam had travelled using the “undercover” identity of Kim Chol. “We have looked into the possibility that he travelled using a fake passport. I think he has two different identities. Probably this is an undercover document. But it is an authentic passport,” he mentioned.