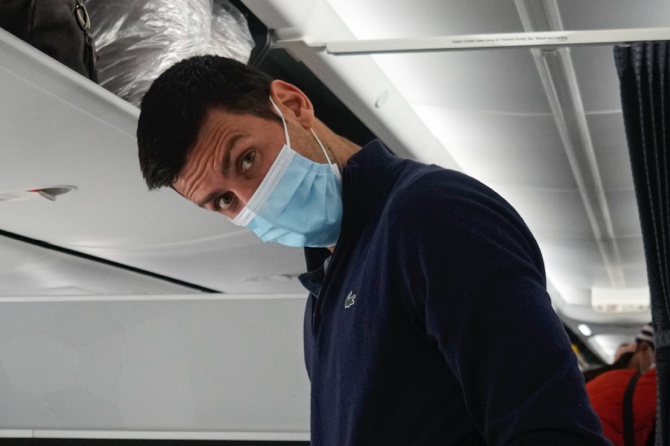 Novak Djokovic arrived in his native Serbia yesterday after being deported from Australia because he was not vaccinated against COVID-19, ending his hopes of defending his Australian Open title.

The tennis star’s exit from Australia closed at least the first chapter in a dizzying drama that has resonance in the world of elite sports, Australian pandemic politics and the polarized debate over the COVID-19 shots. But even as one saga appeared to close, another opened as questions arose over whether he would be barred from the next Grand Slam tournament, the French Open.

A plane carrying the No. 1-ranked player from his stopover in Dubai, United Arab Emirates, touched down in the Serbian capital, Belgrade, where he is expected to receive a hero’s welcome.

Djokovic had argued in an Australian court he should be allowed to stay and compete because a recent coronavirus infection meant he was exempt from strict vaccination rules. But Australian authorities cited the public interest in revoking his visa, saying his presence could stir up anti-vaccine sentiments and that kicking him out was necessary to keep Australians safe.

The Grand Slam started yesterday in Melbourne, where Djokovic has won nine titles. He had hoped this year to win his 21st Grand Slam singles trophy there, breaking the record he shares with rivals Roger Federer and Rafael Nadal for the most in the history of men’s tennis. Federer is not playing while recovering from injury, but Nadal is competing.

Even as he flew home from Australia, doubts arose over whether Djokovic would be able to play in the French Open. A member of the French Parliament said a new law that will exclude unvaccinated people from sports venues, restaurants and other public places will apply anyone who wants to play in the tournament.

The comments yesterday from Christophe Castaner and a tweet from the sports minister late Sunday marked a reversal from prior plans to create a “bubble” around the tournament, scheduled for late May into June.

France’s sports ministry said once the new law is in place, there will be no exceptions until further notice.

For now, a warm welcome likely awaits Djokovic, who has overwhelming support in his native Serbia where his closest family lives. Serbian President Aleksandar Vucic has accused the Australian government of “harassing” the top-ranked tennis star and urged him to return where he would be welcomed.

Djokovic flew to Australia with a visa issued after he received an exemption to play in the tournament because he had recently recovered from COVID-19. But border said that exemption wasn’t valid and moved to deport him.

Vaccination amid the pandemic is a requirement for anyone at the Australian Open, whether players, their coaches or anyone at the tournament site. More than 95% of all Top 100 men and women in their tours’ respective rankings are vaccinated. At least two other men — American Tennys Sandgren and Frenchman Pierre-Hugues Herbert — skipped the first major tournament of the year due to the vaccine requirement. MDT/AP