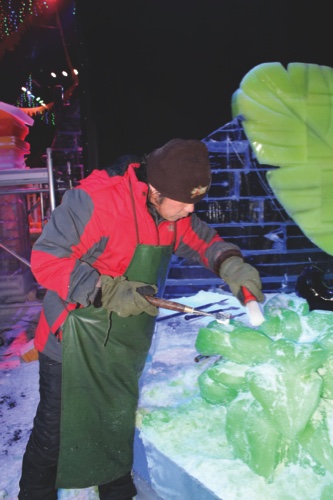 This week, well-known animated characters will return to the Venetian Macao for the “Penguins Undercover Ice World with the DreamWorks Gang” ice sculpture exhibition. From this Thursday until March 8 2015, the Penguins of Madagascar will bring a taste of cold weather to town, as ice sculpture artists from Harbin, China, recreate some of the world’s most famous animated characters – all from ice.
Bai Liang, project manager for the Heilongjiang Provincial Ice Fun World, the Chinese company building the ice sculptures, got started in ice sculpture exhibitions back in 1966 in Harbin.
The largest city in Heilongjiang province, Harbin is known for its large-scale ice sculpture festival held throughout the winter. Mr Liang soon learned ice sculpting and realized that in a country with only about 300 ice sculpture artists, he could find success. Since his first ice sculpture exhibition in the city back in 1966, Mr Liang has committed himself to a career of carving beauty from ice.
It’s his fourth time teaming up with the Venetian Macao to bring the city a taste of an “Ice World.”
According to Mr Liang, this exhibition is all about having the necessary skills to recreate DreamWorks characters in great detail. “It’s really hard, especially when it comes to sculpting ‘people.’ One has to pay attention first to the drawing and then turn the drawing into a real 3D sculpture.”
The exhibition area covers more than 1,600 square meters, which Mr Liang says is very different from working in Harbin, where weather conditions make it rather difficult to carve minute details.
“This is an indoor exhibition, so it’s easier to shape sculptures. Although the Harbin exhibition has a larger scape capacity, it is highly affected by wind and even when we shape certain details, it might change after one or two days, depending on weather conditions,” he said.
In addition, an indoor exhibition will allow the team to work with colored ice, whereas in Harbin the sculptures’ colour is achieved by lighting effects.
As this is the second year in a row working with DreamWorks, Mr Liang said that communication has improved, particularly when it comes to designing the characters: “This year, we had a design company working on that, so it’s easier to meet DreamWorks needs’ in terms of design; last year, we did the design ourselves.”
The exhibition tells the story of the “Penguins of Madagascar,” who will take visitors on a journey to meet DreamWorks characters, beginning in Venice. They will be introduced to Italy’s piazzas, bridges and canals, as well as singing gondoliers, before meeting well-known characters such as Shrek, or King Julien, and Alex the lion, as well as all the zoosters from Madagascar.
Visitors will be able to meet Toothless and all of their Viking friends before reaching the Chinese Jade Palace, where they can slide down one of four slides under the gaze of Kung Fu Panda.