Drive In | In ‘The Courier,’ Cumberbatch is an everyman spy 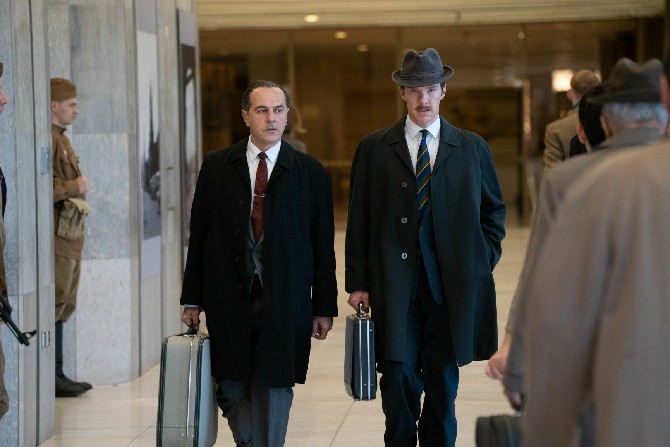 Merab Ninidze (left) and Benedict Cumberbatch in a scene from “The Courier,” a Lionsgate release

The new Cold War film “The Courier “ about a Soviet whistleblower and the British businessman who helped transport information to Western intelligence agencies is both based on real events and people and also is very much the product of a screenwriter’s imagination. That’s not to criticize the film written by Tom O’Connor (“The Hitman’s Bodyguard”) and directed by Dominic Cooke (“On Chesil Beach”). It’s simply to say that it is more historical fiction than it is history. The whole truth of this extraordinary chapter has likely died with the principal characters and/or been obscured and distorted by the people who write these things down.
What we know is that there was indeed a Soviet official named Oleg Penkovsky, played in the film by Georgian actor Merab Ninidze, who was an essential source for the Americans during the Cold War and the leadup to the Cuban Missile Crisis. One of Penkovsky’s contacts was a British civilian named Greville Wynne, who wrote an autobiography about his experiences. Even the reliability of that account has been questioned. Still, it provided an intriguing jumping off point for O’Connor to write a classic espionage thriller that opens in select theaters Friday.
In “The Courier,” after Penkovsky makes an initial outreach to the West, MI6 and the CIA are at a loss for how to cultivate him as a source. They decide a civilian who might do business in the Soviet Union is the best bet and somewhat casually land on Wynne.
Cumberbatch, who we’ve seen play suave, cruel and egotistical many times over the years, plays Wynne as an ordinary middle class schlub just trying to keep his family afloat and club memberships intact. He doesn’t suspect he’s dining with spies when his government friend Dickie (Angus Wright) and an American CIA agent, Emily (Rachel Brosnahan), sit down with him to recruit him into service. He reacts with a boyish giddiness as though it was Ian Fleming himself sitting across the table.
Emily is one of the inventions of the film. O’Connor has said he just decided to make the CIA agent a woman. It certainly breaks up the monotony of such a male cast and it’s always a delight to see Brosnahan in 60s garb. But it also feels a little insincere to just insert women in specific historical settings where they weren’t. It was also done with the Felicity Jones character in “The Aeronauts” and the effect is often the opposite of empowering. Since “The Courier” is so fictionalized, however, it’s easier to accept here. Plus, she gets to be the more persuasive agent.
“The Courier” is a story we haven’t seen on film but it still feels very familiar most of the time, with espionage film tropes and cliches to spare. While it might not be on the same level as “Bridge of Spies,” it’s solid, well-acted and enjoyable nonetheless. Just don’t use it as the text for any history reports.