Duterte seen by public as ‘selling out’ to China, deputy says 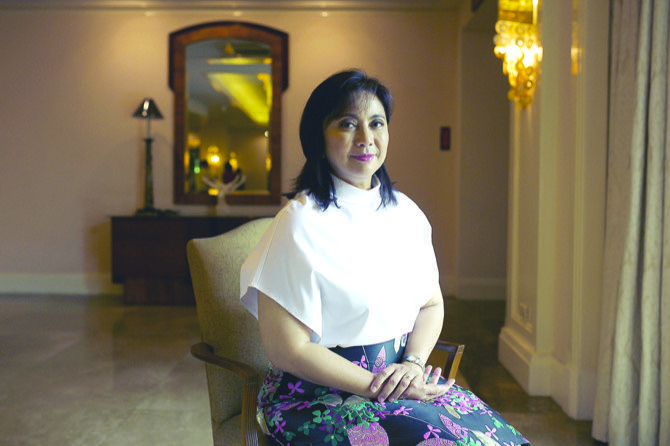 Philippine Vice President Leni Robredo said citizens were worried Rodrigo Duterte was “selling out” to Beijing and called on the president to take a stronger stand to protect the country’s sovereignty in the disputed South China Sea.

Robredo, who is keeping her options open regarding the presidential race in 2022, said in an interview yesterday the president had not taken advantage of an international tribunal ruling that affirmed the Philippines’ economic rights in a maritime zone also claimed by China.

“I understand why our new administration is more friendly to China, but I think there should be a clear line as far as protecting our territory and sovereignty,” Robredo told Bloomberg TV’s Haslinda Amin in Manila. “The president has made a lot of statements which gives a sense we are acquiescing to what China wants.”

The public is afraid, she said, “we might wake up one day and many of our territories are no longer ours.” Robredo hopes Duterte will raise the ruling in his meeting with China President Xi Jinping this month, and urged greater transparency in loans and deals with Beijing.

U.S. presence in disputed waters is “a source of comfort,” Robredo added, but the Philippines should not rely on any foreign power. “Friendships with both the U.S. and China will be beneficial.”

Robredo is in the unusual position of serving as both the vice president and the main opposition leader, due to Philippine rules in which the president and vice president are elected separately. She has been on the receiving end of attacks from Duterte, whose critics have been jailed or ousted since he came to power in 2016.

She said she was ready for the presidency but would decide later on whether to stand as the opposition Liberal Party’s main candidate in elections three years from now, when Filipinos will vote on Duterte’s successor.

At the height of questions about his health last month, Duterte said he doesn’t want Robredo to succeed him, describing her as “not capable of running a country.” The vice president has led opposition to Duterte’s drug war that has killed thousands.

Robredo, 54, entered politics as a congresswoman in 2013 — a year after her husband, Interior Secretary Jesse Robredo, died in a plane crash. A lawyer with an economics degree, she pushed for bills requiring officials to fully disclose their wealth and allowing citizens to participate in local policy making.

The vice president won on an anti-poverty platform, promising to help those in the fringes of society. However she has received below-majority popularity ratings in the first three years of her term based on surveys from Social Weather Stations, while Duterte’s rating recently hit a new high of +68.

“Robredo is not presenting the full dose of the alternatives to Duterte,” said Segundo Romero, a political scientist at Ateneo de Manila University. “If you look at social media, opposition to Duterte is already high decibel, yet the opposition leader stays at mid-range. That’s why she’s not generating the high levels of approval.”

Robredo has said she’s determined to finish her six-year term in the face of an election protest from Ferdinand Marcos Jr., the late dictator’s son whom she narrowly defeated in 2016. Duterte prefers Marcos as his elected successor.

The second woman to win the post, Robredo is also under investigation by the Justice Department after the police filed a sedition complaint against her for supposedly plotting with priests and opposition members to oust Duterte. A supporter of the president also earlier threatened to impeach her for supporting a probe on the drug war. She’s described the charges as “trumped up.” Andreo Calonzo, Bloomberg