Duterte suspends any loan talks with backers of rights probe 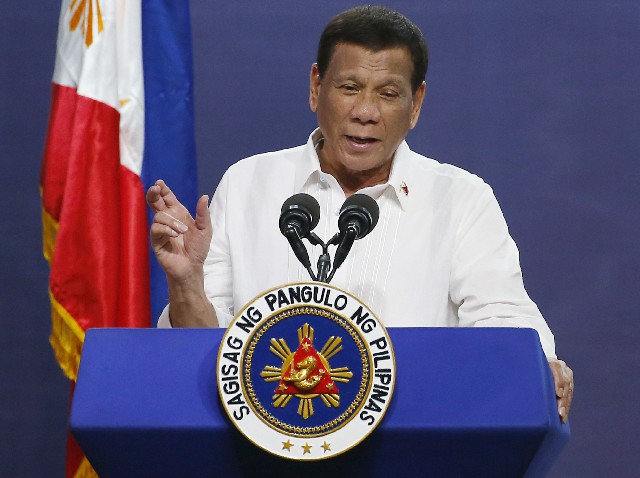 Philippine President Rodrigo Duterte has suspended any negotiations over loans or grants from 18 countries that backed a U.N. human rights resolution calling for an inquiry into human rights conditions in the Philippines, an official said yesterday.
Presidential spokesman Salvador Panelo said Duterte asked his executive secretary last month to issue a confidential memo ordering the suspension of talks on any loans and grants that might be offered by the 18 countries.
Panelo initially denied last week that Duterte had issued the order but then said the president later remembered he had done so when he was shown a copy of the Aug. 27 memo signed by his executive secretary.
The 18 countries supported an Iceland-initiated resolution in July that asked the U.N. High Commissioner for Human Rights to look into human rights conditions in the Philippines under Duterte’s anti-drug crackdown, which has left thousands of mostly poor drug suspects dead. Duterte reacted angrily to the 18 countries, particularly Iceland.
Panelo downplayed the effect of Duterte’s move, saying it would not have a significant effect on the government’s infrastructure program.
Existing foreign grants of about USD377 million, some from countries which supported the proposed U.N. human rights investigation like Australia, will not be affected, Panelo said.
Only a loan from Britain is likely to be affected because it has made compliance with human rights standards a requirement for loan approval, officials said.
“It will not dramatically, even slightly I think, impact on our economy,” Panelo said. He quoted Duterte as saying, “tell them I’m really deliberately resorting to expletives because I’m angry at what they’re doing to us and our country. They want us investigated and look who are talking, they are actually the murderers.”
The U.N. Human Rights Council voted 18-14 with 15 abstentions in July to approve the resolution, which called on the Philippine government to take all steps to prevent extrajudicial killings in addition to asking the U.N. High Commissioner for Human Rights to prepare a comprehensive report on the Philippines.
The resolution called for Philippine government cooperation, “including by facilitating country visits and preventing and refraining from all acts of intimidation or retaliation.”
Duterte, a former prosecutor, has repeatedly lashed out at U.N. human rights experts critical of his anti-drug campaign. Separately, an International Criminal Court prosecutor is examining information about the drug killings.
Duterte and the police have denied authorizing extrajudicial killings.
However, he has repeatedly threatened drug suspects with death in televised speeches and encouraged law enforcers to shoot suspects who fight back. He has warned that the crackdown will be more dangerous for suspects in the final three years of his six-year term. Jim Gomez, Manila, AP