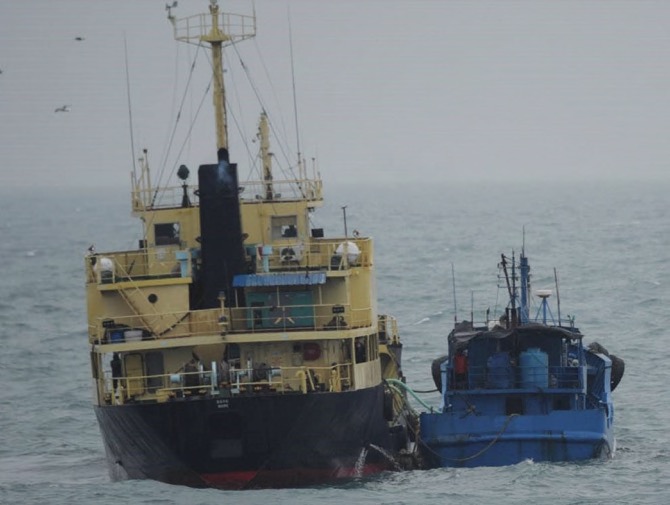 Japan’s military has witnessed a ship-to- ship transfer on the high seas that it “strongly suspects” violates U.N. sanctions on North Korea, in the third such incident reported by Japan in the past month.

A maritime Self-Defense Force PC-3 surveillance plane and an escort ship saw a North Korean-flagged tanker alongside a smaller ship on Feb. 16 about 250 kilometers off Shanghai in the East China Sea, the Foreign Ministry said this week.

Photos posted on the Foreign Ministry website show the two ships with what appear to be hoses running between them. The ministry identified the North Korean tanker as the Yu Jong 2. It said the other vessel is of unknown nationality, but had “Min Ning De You 078” written in Chinese on its bow, which is shorthand for an oil ship from Ningde city in China’s coastal Fujian province.

The U.N. has toughened sanctions on North Korea to pressure it to give up its nuclear weapons development. Japan and the U.S. have said the sanctions must be enforced strictly to be effective, and asked China in particular to tighten enforcement.

The Foreign Ministry said Japan had notified the U.N. Security Council of the transfer. AP