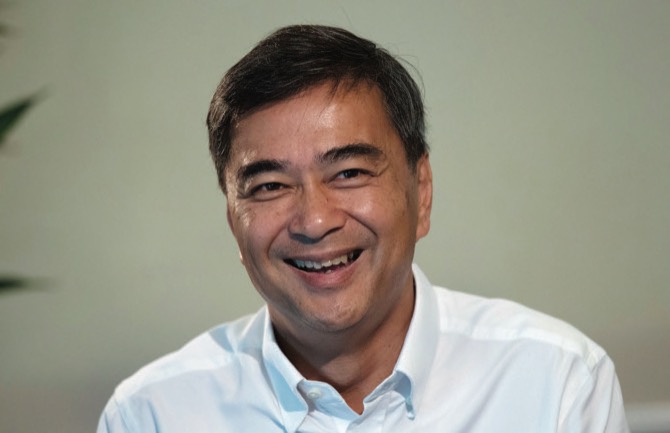 The leader of Thailand’s oldest political party said if he becomes prime minister after Sunday’s elections, he will make forceful but careful efforts to undo undemocratic provisions in the constitution imposed by the military government that seized power in 2014.

Abhisit Vejjajiva, head of the Democrat Party and a former prime minister, said in an interview with The Associated Press that the polls, the first since the coup, give Thailand a chance to halt military interventions in politics and respond effectively to challenges such as technological disruptions, an aging society and high inequality.

Sunday’s general election is “important for the whole country. It’s a chance now to get the country out of the cycle of dictatorships and corrupt governments,” he told AP on Wednesday.

The army toppled an elected government in 2014 after months of sometimes-violent street protests that paralyzed Bangkok’s streets. The army said its goal was to restore stability but ruled with a heavy hand and for much longer than it had promised.

It has cracked down on its critics while imposing a new constitution and election laws that give its allies a powerful advantage in the balloting and increase the chances of Prime Minister Prayuth Chan-ocha, the coup leader, remaining in office.

Abhisit noted “irregularities” by Prayuth and the party backing him. Referring to campaign-like activities by Prayuth that are treated as official business, he said they are “obviously not held to the same kind of rules and standards” as other parties. But with four days to go before the vote, he said he was hopeful the election would proceed smoothly.

“My appeal to the people involved is let’s not make this an election that is unacceptable,” he said. “Let’s not make this election unfree or unfair. Not because one side would benefit over the other. But because we need to maintain the integrity of the system.”

Many political parties have heavily criticized the 2016 constitution pushed through by the military government, with some saying it should be completely rewritten.

Abhisit agreed there is much in the constitution that needs to be addressed but said battles should be carefully chosen.

“The way we go about it is, I think, we have to identify and be clear about what kind of issues that need to be amended, particularly the undemocratic aspects of the constitution,” he said. “Build a consensus around it. Gain public support to put pressure on senators to accept that amendments are needed.”

He warned that a call for wholesale change might be risky.

“If you say you rewrite or revamp the whole constitution, there continues to be a deep distrust that politicians might also use this to rid themselves of the various checks and balance mechanisms,” he said.

A view of politicians as a corrupt element of society contributes to the cycle of elections followed by coups, Abhisit said, noting that “one of the clearest conditions for previous coups has been rampant corruption.”

The Democrat Party shares the conservative, royalist viewpoint of the military but also professes adherence to democratic principles, leading to sometimes uneasy alliances. Abhisit became prime minister in 2008 with the political backing of the army, and was forced to rely on it to put down violent protests in 2009 and 2010 against his government.

He said he hopes to end the military’s influence in politics by using the power of persuasion rather than antagonism. Several other parties contesting the polls have attracted attention with campaign promises to slash the military budget, an idea that has drawn scorn from military leaders.

He said reducing the military budget can be done “by talking to the military, using reasoning, looking at the fiscal situation, assessing the necessity of their proposed projects.”

“I don’t see the value of being deliberately confrontational. I don’t see the value of creating political controversy about these issues,” Abhisit said. “My government was one that actually succeeded in reducing the defense budget. We didn’t make any noise about it. We didn’t make it a conflict with the military. We just have to work professionally.”

“I’ve learned from experience,” Abhisit said. “The challenges facing the country have changed. We’ve now got many more new challenges. Technological disruptions, an aging or fast-aging society, a high degree of inequality — these need to be met head on.” Preeyapa T. Khunsong & Tassanee Vejpongsa, Bangkok, AP