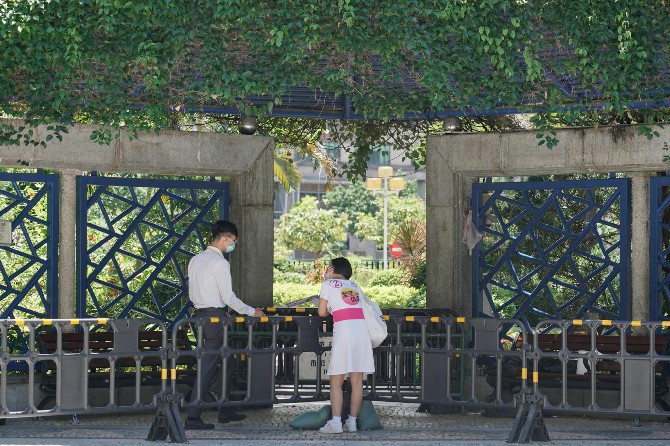 Agnes Lam, a candidate in the Legislative Assembly election, complained yesterday afternoon about being put in “a cage” at the designated campaign site on Alameda Dr Carlos D’Assumpção.
An area in the Dr Carlos D’Assumpção Park has been cordoned off with plastic crowd management barriers by the Municipal Affairs Bureau. No through-passage was allowed according to officers and security guards on site.
Highlighting the situation in a live video on social media, the candidate pointed out that the barriers would obstruct candidates from interacting with pedestrians and voters. In addition, she noted that the authorities did not allow them to make an opening in the barriers for any interested pedestrians to enter and interact with candidates.
She also raised the problem of the confined space sitting right at the intersection of two passageways of the park, which may strengthen public perceptions of the election being a nuisance.
Interviewed by the Times, Lam said that certain negotiations were conducted on site but no change was made possible. “But after we left, I got a call from the Electoral Affairs Commission (CAEAL), explaining that there was a miscommunication and that through-passages are allowed,” the candidate said.
The CAEAL, in reply to a related enquiry from the Times, said that “pursuant to the [campaign] management guidelines, […] clear partitions between campaign and public areas must be achieved.” The CAEAL stressed that this arrangement should not be substantially altered or changed. AL