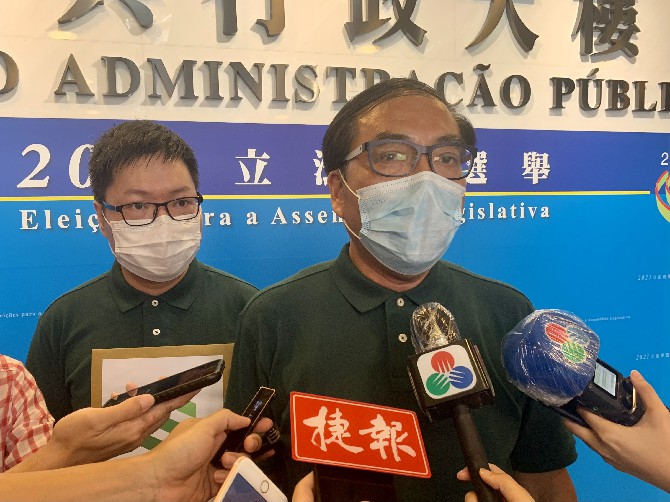 The government should conduct reviews and reflect on the reasons behind the 5,000 or so spoiled ballots in this Legislative Assembly (AL) election, former lawmaker Paul Chan Wai Chi told the Times.
Chan was set to participate in this past election, even submitting a collection of nominations and a list of candidates before he was disqualified by the Legislative Assembly Electoral Affairs Commission (CAEAL) on the grounds of not pledging allegiance to the Macau SAR and not upholding the Macau Basic Law.
Just 42% of eligible voters cast a ballot at this election, the lowest turnout in the history of the Macau SAR. The CAEAL head blamed nature – specifically the weather and the Covid-19 pandemic – as the culprit. Aside from the record-breaking low turnout, 3,141 blank ballots and 2,082 void votes were also recorded in the election.
Yesterday, the CAEAL presented to the public some of the invalid votes that were cast. Most of these ballots had opinionated messages written or stamped on them. Like many members of the public, Chan therefore saw them as voters making their political stances clear.
Commenting on the low turnout, the former lawmaker recalled that nature was much more discouraging in the 2005 AL election than this year. “I remember the election day in 2005 saw the typhoon signal No. 3 hoisted, in contrast to the half-an-hour [of] heavy rain and hot weather this year,” he said. Despite the typhoon signal, the 2005 election recorded turnout of 58.39%, higher than this year’s 42.38%.
All in all, he says that that the government should not shy away from recognizing the impact on voters of the disqualification of about 20 candidates from the election.
The former lawmaker also expressed that the relative uniformity of views in the consistency of the upcoming AL may not be good for the city, hinting that the government will not be able to hear opinions from the other side of the coin. He added that the parliament being too singular and too consistent is not good for pluralism in the city.
“Let me put it this way: the stability of the earth’s crust relies on the existence of various tectonic plates,” he said. “If a tectonic plate is removed abruptly, I don’t think the crust will be as stable as it has been.”
As a result, the concentration of similar views will have a negative impact on the city, he said.
Discussing his prospects in the next four years, he thinks that Ron Lam, a new face in the parliament who positions himself as a centrist, will be able to hold the government to account on many topics.
“Considering his past speeches, he could express himself [on various] topics,” Chan said. Nonetheless, the former lawmaker is not very optimistic about Lam working on behalf of the disqualified democrats through measures such as pushing forward systematic changes to institutionalize rights and other issues.
Remarking on the disqualified democrats, Chan opined that they should not diminish just because they got disqualified. “As long as their entities or organizations still exist, they should monitor the government outside the parliament,” Chan added.