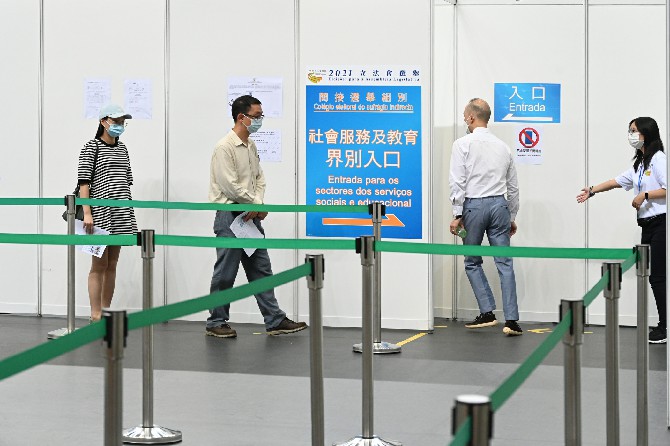 The police forces are currently investigating a total of 44 cases that involve electoral irregularities, the president of the Legislative Assembly Electoral Affairs Commission (CAEAL), Tong Hio Fong, informed yesterday evening during the CAEAL briefing yesterday.
According to Tong, such irregularities involve mobile phones use inside the voting booths (26 cases), filming (11 cases) and unlawful electoral propaganda (six cases), among others.
The cases involving propaganda are related with the posting of propaganda materials on buses as well as disclosing on the internet voting intentions on a certain candidate or list.
Earlier the day, while voting, the commissioner-general of the Unitary Police Service (SPU) Leong Man Cheong referred to some of these cases, noting that all suspected cases would be investigated.
He added that the police will proceed with investigations to verify whether mobile phone usage within the polling station — and the purpose(s) behind their usage — did or did not violate the law.
The SPU commissioner-general also revealed that 25 cases of electoral irregularities have been already forwarded by the police force to the Public Prosecutions Office including cases in which candidate lists have failed to remove electoral propaganda from the Internet, as well as from candidacy headquarters, restaurants, and other public venues, among others. RM