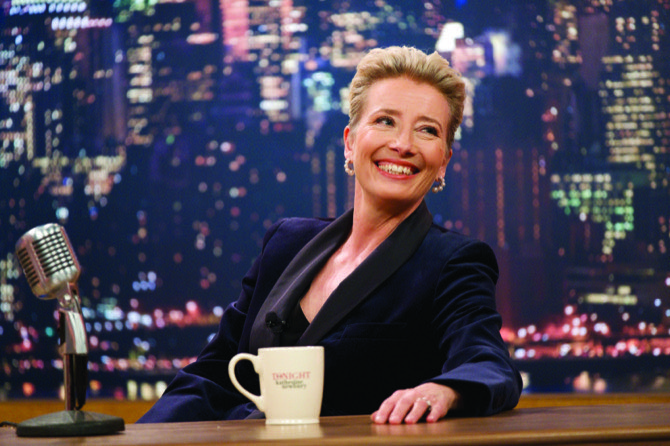 Emma Thompson in a scene from “Late Night”

Watching “Late Night,” an enjoyably zippy if scattershot comedy about a veteran late-night host and her fresh-faced new writing hire, a persistent thought runs through your head: How have we been abiding without a steady supply of leading roles like this for Emma Thompson, and why haven’t we by now elected her ruler of all living things?

As a David Letterman-like figure whose three decades on the air have left her disengaged and fearsome, Thompson is so regally good that you crave more of an actress who certainly never went away but who has in recent years often kept to the margins of movies.

She was Mrs. Potts in “Beauty and the Beast,” a memorable P.L. Travers in “Saving Mr. Banks” and gave “Love Actually” its best, most tender moments. Her status as someone whom anyone in their right mind adores is absolutely assured. But it’s been a while since her period-drama heyday of “Howard’s End,” ‘’Remains of the Day,” ‘’In the Name of the Father” and “Sense and Sensibility,” which she also scripted.

Nisha Ganatra’s “Late Night,” penned by Mindy Kaling, is a clear reminder of what we’ve been missing. Her Katherine Newbury, like Meryl Streep’s Miranda Priestly, is a boss from hell. She hasn’t ever met most of her writing staff, and when she does, gives them numbers, one through eight, to remember them by. She makes all around her, including some of her guests, tremble.

Her reign in late-night television, though, is at risk of coming to an end. She’s visited early in “Late Night” by the network head (Amy Ryan) who tells her she will soon be replaced by someone who will pick up the ratings and program more viral-ready guests than Doris Kearns Goodwin to compete with Jimmy Fallon’s cuddly antics. So resentful of the intrusion is Katherine that she’s not even sure she’ll put up much of a fight.

The twist comes from Molly Patel (Kaling), who’s hired by the show’s producer (Denis O’Hare) after it’s brought to Katherine’s attention that she has a problem with women. All of her writers are men. “Just a hire a woman!” she barks at the producer, just as he’s sitting across from Molly, who has no experience in comedy but has been a chipper efficiency expert at a Pennsylvania chemical plant.

Late-night TV has, of course, been a boy’s world for most of its history, a lineage “Late Night” has a lot of fun playing with. It doesn’t always quite gel. Could Katherine deny her own femininity while simultaneously being a late-night trailblazer for women? Wouldn’t Molly’s character be a little more believable if she was a devoted comedy writer, those Tina Fey referenced when she last year told Letterman that they had been out there, wanting to write on his show.

Maybe when it comes to late-night television, realism isn’t the way to go. You just can’t beat “The Larry Sanders Show,” after all. But “Late Night” isn’t quite sure how real it wants to be, cartoonishly exaggerating some angles and telling others straight. Most of the real-life late-night hosts are referenced or make cameos, including Seth Meyers and Bill Maher. Yet the inner-workings of “Late Night with Katherine Newbury” aren’t especially believable and it never feels like an actual show.

The movie is better as a workplace comedy that plunges right into very contemporary issues of diversity and sexism in media. Entering the all-male writing room, Molly receives a frigid welcome, turning over a garbage can for seat. Kaling is working from a place of personal experience, having begun as a writer, as well as a performer, on “The Office.” Her character is derided as a “diversity hire” by most of the bros on staff, the bro-est of them all played by Reid Scott in a character not too far away from his on “Veep.”

It’s a winning performance from Kaling, whose Molly pluckily makes her way on the show and jostles Katherine into opening up herself and embracing her political side. It’s an admirably fun and light movie about more serious issues of representation and equality. But the remade version of “Late Night with Katherine Newbury” that emerges at the end — pointedly political and bursting with viral video-bits — is dispiritingly familiar. There are plenty of those on late-night TV, already. But if Emma Thompson would like the gig, by all means give it to her.  Jake Coyle AP, Film Writer

“Late Night,” an Amazon Studios release, is rated R by the Motion Picture Association of America for language throughout and some sexual references. Running time: 102 minutes.