ENTERTAINMENT | A Christmas with Penguins of Madagascar 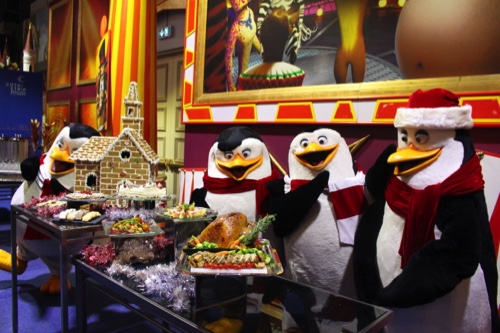 Sands Cotai Central will be collaborating with DreamWorks Animation to prepare a Christmas lunch feast and dinner buffet between December 24 and 26, as well as a New Year’s Eve dinner buffet on December 31. A staged performance of the Penguins of Madagascar and other DreamWorks characters will also be available between Christmas Eve and Boxing Day at the Sands Cotai Central’s Urumqi ballroom.
Alex Gaspar, executive sous chef of banquet and production at Sands Cotai Central told the Times that there is a lot of inspiration to draw from the DreamWorks theme from which to design the dishes. Apart from traditional items such as turkey with stuffing, the chef has also prepared some more luxurious dishes. “We do a foie gras terrine and we do it with a Christmas theme like port wine poached figs. We also have more luxurious items like lobster on ice. We do some Chinese specialties too, like wok-fried beef with foie gras [and] asparagus,” he said.
“Then of course the desert session, which [includes] almost all very traditional Christmas items. We’ve got the French log cake, our gingerbread house and gingerbread man that is very popular.”
Chef Gaspar has especially mentioned the turkeys, for which he said the cooking involved a lot of work. Not only does his team have to marinate the turkeys for a whole day, they have put a lot of ingredients into making the stock and roasting the turkeys for three hours.
Moreover, the chef remarked that it is very special for him to cook for others during Christmas, a season that he loves. “I love Christmas because it is so different from the other holidays. You can definitely notice when it is Christmas. There is the smell of cinnamon, of dried food, of turkey, ham… It’s always those smells that I love in Christmas and that’s kind of a source of inspiration,” he said.
Other than the delicious dishes, the Penguins of Madagascar will also perform a special holiday dance routine for guests during the buffets. Guests will also enjoy the excitement of a New Year’s Eve countdown party. Additionally, each child at the feast will receive a special holiday gift from the DreamWorks gang.
DreamWorks Animation is a United States film production company founded in 1994. With its headquarters at Glendale, California, DreamWorks is famous for its CG animated feature films including Shrek, Madagascar and Kung Fu Panda. JPL