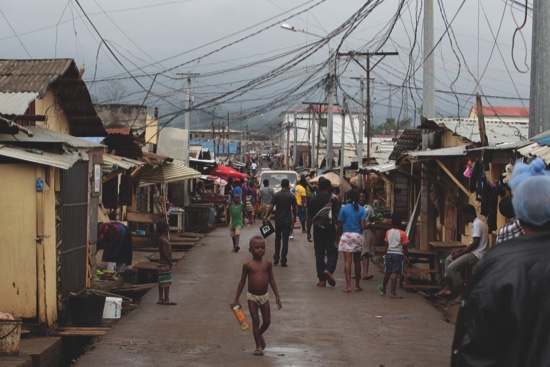 A neighborhood in central Malabo, capital of Equatorial Guinea

Equatorial Guinea wants to join Forum Macau and “apparently it has China’s blessing,” a diplomatic source told the Times. The membership of Eq. Guinea, a Franco-Lusophone-Spanish country, “may be formalized by the third quarter this year,” during the next Ministers’ Conference of the organization to be held in Macau.
About to celebrate its first anniversary as a member of the Community of Portuguese Speaking Countries (CPLP) in July, the west central African country, with a population of 1.6 million, is becoming a magnet for Chinese investment in Africa.
According to our sources, “other countries in Africa” are willing to join Forum Macau, even though they are not part of the CPLP. “We are talking of countries that claim to have Portuguese influence in the past,” the diplomat said, “although they don’t have Portuguese as an official language.”
The recent five-day visit to Beijing by the president of Equatorial Guinea, Teodoro Obiang, resulted in a credit line of USD2 billion and the release projects of at least three major Chinese business groups, at a time when the African country is dealing with difficulties due to the oil price breaks, its main export.
The Chinese Prime Minister, Li Keqiang said that Equatorial Guinea has “developed relatively well” with the government “supporting the expansion of investment in infrastructure, of which the country has a great need,” Macauhub reported this week.
During the visit, which also marked the 45th anniversary of the establishment of diplomatic relations between the two countries, agreements were signed with Chinese companies for power generation and industrial development projects, which are an essential part of the government’s objective to diversify the economy beyond oil.
Central to this objective is the USD2 billion credit line that the Industrial and Commercial Bank of China, China’s largest bank by assets, granted to Equatorial Guinea in order to finance work carried out by Chinese companies in the country, as part of a mechanism endorsed by the presidents of both countries.
The Ministry of Mines, Industry and Energy signed three agreements for projects in the country, including with China Dalian International Cooperation Group (CDIG) to start technical studies for the development of the industrial city of Mbini, which the government intends to make an economic benchmark in that African region.
The China State Construction Engineering Corporation will also be involved in the development of oil facilities in the town of Luba, extending the local port to make it a logistics hub for the oil and gas industry and other industrial activities.
Equatorial Guinea’s membership of the CPLP was confirmed at the organization’s latest summit in July 2014 in Dili, at a time when it had important economic links, especially with Brazil.
The country’s membership has added nearly $20 billion to the combined GDP of Portuguese-speaking countries, which currently represents close to 4 percent of the world total, and is expected to continue growing.
*With Macauhub