EXTREMISM | Hunt on for militants who beheaded French mountaineer 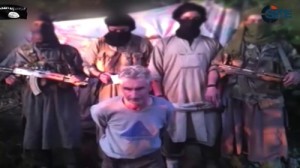 Members of a group calling itself Jund al-Khilafah, or Soldiers of the Caliphate, stand behind French mountaineer Herve Gourdel just before beheading him

France’s defense minister said yesterday that Algerian forces are hunting for the Muslim extremists who beheaded a French mountaineer over France’s airstrikes on the Islamic State group.
Jean-Yves Le Drian also said France, which has limited airstrikes so far to Iraq, would continue to evaluate whether to extend them to Syria as the United States has done to thwart the extremists’ advances. He said French jets were in flight as he spoke.
Asked about the 30,000 French citizens living in Algeria, Le Drian told RTL radio that the goal of the extremist groups is to “spread terror.”
Herve Gourdel was seized Sunday while hiking in the Djura Djura mountains of northern Algeria. His Algerian companions were freed. A video appeared online Wednesday showing masked militants beheading him.
The Algerian military said a massive search for the “criminals” was underway and would continue until “they were totally eliminated and the country was purified of their abject acts.”
For its part, the Algerian government reiterated its commitment last night to protecting foreign residents living inside the country.
There are fears that other radical Islamist groups may carry out copycat attacks on Westerners following calls by the Islamic State group on Sunday.
The kidnapping and murder of Gourdel, however, is believed to be a crime of opportunity, since Algeria’s extremist have been confined to remote mountainous regions and the French mountaineer was one of the few foreigners to venture into this area. AP