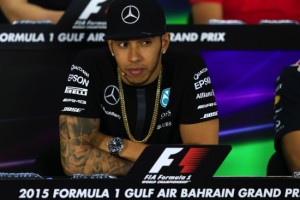 Formula One champion Lewis Hamilton defended himself yesterday from the criticism surrounding his behavior at the Chinese Grand Prix, when he celebrated victory by spraying Champagne into the face of a podium hostess.
Hamilton said his actions, which led to strong criticism on social media and at home, were nothing unusual and part of the sport.
“I haven’t really heard too much about it until today, so fortunately for me it’s not overshadowed my week,” the two-time F1 champion from Britain said. “It was a great weekend and my actions are through excitement, you know? This is Formula One and it’s the pinnacle of motorsport and I’ve just won a Grand Prix for the team.”
The hostess, Liu Siying, a 22-year-old graduate of the Shanghai Institute of Visual Art who works for a real estate company, told the Shanghai Daily News on Wednesday that the incident has been blown out of proportion.
“It lasted for only one or two seconds, and I didn’t think too much about it,” Liu said. “I think some foreign media are more sensitive about the topic than local media. I was just told by my employer to stand on the podium, and that’s what I did.”
Champagne spraying in F1 has been commonplace for a long time, with drivers often spraying each other and anyone else around them.
“It was kind of a fun thing, I would never intend to disrespect someone or embarrass someone like that,” Hamilton said. “This is a sport that so many people love, for the show of character, fun. Perhaps it reflects just how great the sport is and that’s what I try and do.”
Hamilton, who is the championship leader after three races, was relieved to hear that the hostess had not taken offense.
“It’s nice to know that the lady didn’t,” Hamilton said. “If it was the other way and she had been really unhappy, then perhaps there’d be more to say.” AP