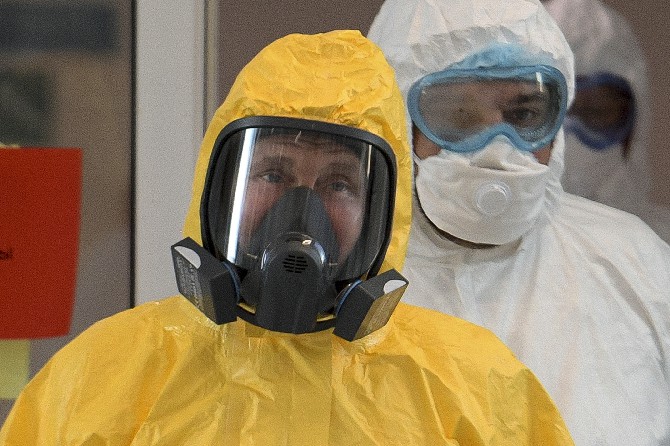 Two weeks ago, an opposition-leaning radio station in Russia interviewed political analyst Valery Solovei, who alleged the government was lying when it said no one had died in the country from the coronavirus.
Solovei told radio station Echo Moskvy at least 1,600 people might have died since mid-January. Russia’s media and internet watchdog, Roscomnadzor, quickly pressured the station to delete the interview from its website.
The demand was part of a widespread government campaign against what authorities called “fake news” about the pandemic.
Yesterday [Macau time], Russian lawmakers began putting some teeth behind the campaign, approving fines of up to $25,000 and prison terms of up to five years for anyone who spreads what is deemed to be false information. Media outlets will be fined up to $127,000 if they disseminate disinformation about the outbreak.
Lawmakers rushed the bill through all three readings in just one day after President Vladimir Putin spoke about the need to counter “provocations, stupid gossip and malicious lies” about the outbreak.
The crusade began about a month ago, when Russia’s caseload was still in the single digits. The Kremlin’s stance of “everything is under control” prompted speculation that authorities might be hiding or underreporting the scale of the outbreak in line with Soviet-era traditions of covering up embarrassing truths.
A broad set of measures was outlined and a special “fake news” division in the government’s coronavirus task force was created. A group within Russia’s Investigative Committee was put together to chase down alleged disinformation.
Social media users who doubted the official numbers and news outlets questioning the government response became targets for law enforcement seeking to weed out anything that didn’t correspond with the official data.
“In crises, those in power try very hard to control the information and push their own agenda. And, of course, it makes sense to suppress alternative points of view,” Solovei told The Associated Press.
The AP found at least nine cases against ordinary Russians accused of spreading “untrue information” on social media and via messenger apps, with at least three of them receiving significant fines.
Police statements offered few details but clearly indicated those involved were merely sharing opinions or rumors, rather than deliberately spreading misinformation.
A 32-year-old woman was fined $380 — a significant sum in a country with an average monthly salary of about $550 — for posting on social media something she heard on a bus about the virus in her region. A 26-year- old man was fined a similar amount for a comment he made under a news report claiming a woman died of the virus in a hospital. Another woman faces a fine of about $380-$1,200 for posting about virus cases in her region where no infections were officially reported.
Asked whether the punishments fit these crimes, Kremlin spokesman Dmitry Peskov said they were “absolutely justified.”
“It stirs up unwarranted tensions, and in this situation it needs to be punished in accordance with the law,” he said.
The crackdown on free speech fits a recent pattern. In the past five years, hundreds of people have been prosecuted on charges of extremism for posting, liking or sharing information on social media on sensitive topics like corruption, the conflict with Ukraine, the 2014 annexation of Crimea and the role of the Russian Orthodox Church. Dozens received prison sentences.
In 2018, Putin acknowledged that prosecuting social media users sometimes turns into “idiocy and absurdity,” and he eased the regulations. Such online hunts have since fizzled out, said Damir Gainutdinov, an internet freedom lawyer with Agora, Russia’s prominent legal aid group.
But the void is quickly filling again with a crackdown on those who insult officials or spread so-called “fake news” online – misdemeanors that parliament put on the books last year.
“I think in the nearest future, we will see a rapid growth (of cases) related to fakes as the authorities are trying to suppress any nonofficial information about the coronavirus,” Gainutdinov told AP.
On Monday, Hungary’s parliament also passed a law setting prison terms of up to five years for those convicted of spreading false information about the pandemic. Rights groups said the law allows the government to crack down on press freedom.
The effort to curb alleged disinformation at home came as Russia is once again being accused of spreading it abroad. The European Union recently identified nearly 80 instances of virus-related disinformation in the past two months.
This also follows accusations by U.S. intelligence services that Russia interfered with the 2016 presidential election by spreading false information online — a charge that the Kremlin has steadfastly denied.
Waging disinformation campaigns in the West stems from the same desire to control the narrative, said Mark Galeotti, a Russia expert at the Royal United Services Institute.
To the Kremlin, “there is no such thing as an objective narrative. So given that it is going to be someone’s narrative that triumphs, of course, you want it to be your narrative rather than someone else’s,” Galeotti told the AP.
Kremlin critics argue that its effort to stifle alternative voices during the pandemic is unlikely to succeed.
Dr. Anastasia Vasilyeva, who works with opposition figure Alexei Navalny and leads the Alliance of Doctors union, made headlines in recent weeks exposing Russia’s underfunded, teetering health care system. She told the AP she was contacted by police about spreading false information in her YouTube blog.
“They will have to prove that I lied, so let them prove it,” Vasilyeva said. “They want to scare me in order to stop the others … the truth won’t change because of it.”
Even as Russia moved to control the narrative during the outbreak, some embarrassing news has still slipped out.
Dr. Denis Protsenko, head of Moscow’s top hospital for coronavirus patients, was reported to have the virus. That came only a week after Putin visited the hospital and was photographed shaking hands with Protsenko.
Peskov sought to assure the country that Putin was fine.
“He’s being tested regularly. It’s all right,” Peskov was quoted by the RIA Novosti news agency as saying. DARIA LITVINOVA, MOSCOW, AP