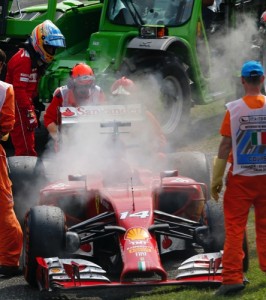 Ferrari’s fall from grace is no longer just a worry on the Formula One track. It’s a cause for concern in the corporate boardroom, too. After six years without a title, the events at and around the weekend’s Italian Grand Prix appear to have set the stage as a tipping point for sweeping changes.
For the first time since 2008, Ferrari failed to a land a car on the podium in its home race. Fernando Alonso retired Sunday due to a mechanical problem on lap 30 of 53 and teammate Kimi Raikkonen finished ninth.
“In Formula One, as in sport in general, there are days to forget and this was certainly one of them,” said team principal Marco Mattiacci, who was installed in April when Stefano Domenicali resigned amid the team’s worst run in nearly 20 years. But the results were only part of the story.
Speculation had been swirling even before the weekend that Ferrari president Luca Di Montezemolo was being forced out of the company four decades after founding father Enzo Ferrari brought him in.
On Saturday, Montezemolo held court in the Monza paddock and insisted he was happy to stay.
“In March I told the shareholders and especially the people at Ferrari, who I’m very close to, that I would be available for another three years,” Montezemolo said. “If there is then anything new, I myself would be the first to say so.”
Sergio Marchionne, the CEO of Ferrari’s parent company Fiat and Chrysler, may have interpreted Montezemolo’s words as a warning linked to how big of a payoff Montezemolo might demand to step aside before his mandate as president ends in 2017.
“We’re not talking about him quitting but nobody is indispensable,” Marchionne said in nearby Cernobbio on Sunday — about half an hour before Alonso’s retirement.
“There are two elements of Ferrari that are important for us: economic results, on which Montezemolo has done a great job, and the sporting management. Ferrari’s heart belongs to winning in F1. Seeing it in this kind of shape, without having won anything since 2008 — even with the best drivers in the world and great engineers — upsets me and bothers me enormously.”
Ferrari has not won all season and with only six more races remaining, the team risks going winless for the first time since 1993 — when Jean Alesi and Gerhard Berger were the team’s drivers. Andrew Dampf, Monza, AP