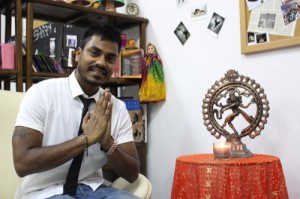 A dance performance organized by the Indian Culture Association of Macau (ICAM) for tomorrow night aims at introducing traditional Indian dance to a local audience.
ICAM president Victor Kumar said that he wants to add classical elements into tomorrow’s performance and “show the culture that has existed since ancient times”.
Mr Kumar said that the reason he wants to introduce Indian culture to Macau is not only because of the peacefulness of the city and the fact that it is filled with many historical buildings. He thinks that while there is a connection between India and Macau through Goa and the Portuguese, the Macau people are not “into” the Indian culture as much as they should be.
“So, I tried my best to add some more flavor, color and culture into it and make it more interesting for the people around and to see me as a cultural ambassador for Indian traditions and dance,” he said.
One of the highlights of tomorrow’s event, Mr Kumar said, is the classical performance with a Bollywood style. “It’s like a musical,” he said.
Apart from bringing all the costumes from India, which definitely adds a traditional flavor to the performance, the president said that there will be other elements added, such as Portuguese dance, Chinese dance and even hip-hop. “We are actually like a cross-over,” he said.
Other than the show tomorrow, the ICAM president also talked about the introduction of Indian culture to Macau in general.
He said that he has been trying to promote his country’s culture through dance, which he thinks is very effective.
“Because everybody likes dancing. And I believe dancing can bring people together (…) Once you play the music, everybody dances. So it makes me feel it’s much easier to promote [the culture through dancing],” he expressed.
Moreover, Victor Kumar has reminded people that although there is only one India, it comprises of different states that have their own unique history and culture. “[India] is magical and diversified. It has a lot of different people in it,” he expressed.
The president revealed they are currently planning classes, activities, performances and even a tour to India so that people from Macau can learn more about India and its culture.
The performance tomorrow night will take place in the Clementina Leitão Ho Brito Theater at 7 p.m. and will last for approximately two hours.