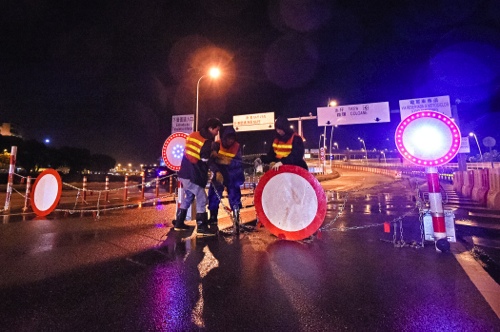 All three bridges between Macau and Taipa were closed at 2:45 as the typhoon approached Macau

Five people were injured last night as Typhoon Kalmaegi moved closer to Macau, forcing the Meteorological and Geophysical Bureau (SMG) to raise its first T8 signal of  the year. Two out of the five people sought medical treatment for typhoon-related injuries.
Macau authorities recorded a total of 86 incidents related to the typhoon, which made landfall on southern China’s Hainan Island yesterday morning.
SMG raised the T8 signal at 1:15 a.m. on Tuesday, and this remained in force until 1:00 p.m. before being lowered to T3. The Civil Protection Operational Centre received reports of one car accident, 17 cases of fallen trees, and three incidents of flooding. 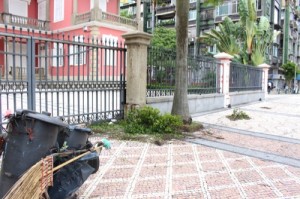 Fallen tree branches and debris in front of the government headquarters

As Typhoon Kalmaegi moved closer to Macau, it unleashed flooding in downtown areas, with several citizens posting pictures of flooded streets on social media.
Several instances of bamboo scaffolding, cranes and advertising structures falling to the ground were also reported.
Kindergartens, as well as primary and secondary schools, suspended classes for the whole day, whereas public services were closed only during Tuesday morning while signal T8 remained in force.
The three bridges connecting Macau and Taipa were closed after the T8 signal was raised, and were re-opened after 1:00 p.m. yesterday.
Sixteen flights departing from Macau International Airport were cancelled, and ferry connections between Macau and Hong Kong were suspended around 11:00 p.m. on Monday when the Hong Kong Observatory raised the T8 signal, leaving dozens of tourists stranded in Macau’s ferry terminal.
Several citizens turned to social media to voice their concerns over taxi drivers overcharging during the typhoon. Some reported that drivers were charging between MOP400 and MOP800 to travel from the Macau Peninsula to Taipa.
SMG’s director, Mr Fong Soi Kun, told TDM yesterday that Macau is unlikely to be hit by another typhoon this summer.
The Hong Kong Observatory also raised its first T8 signal for the year, leading to the closing of schools and suspension of trading on Tuesday morning. A total of 39 flights in and out of Hong Kong Airport were cancelled, and more than 500 were delayed as of Tuesday morning, South China Morning Post reported.
The government said that it had received reports of 44 instances of fallen trees, and four reports of flooding in the Eastern, North and Island districts. Seventeen people received medical treatment in Hong Kong for typhoon-related injuries.
Kalmaegi struck China’s southernmost island of Hainan yesterday, forcing the cancellation of dozens of flights as it headed northwest toward Vietnam, AP reported.
About 90,000 people in southern China were evacuated from high-risk areas, according to China’s Xinhua News Agency. The typhoon’s course dealt only a glancing blow to southern China as the storm headed toward northern Vietnam, where it was expected to make landfall last night.
The typhoon’s intensity, however, has been compared with Rammasun, which last July became the worst tropical storm to hit southern China in 41 years, killing 62 people. Provincial governments of Guangdong and Hainan have therefore issued top-level emergency response alerts.
The storm was sending winds of between 137 and 144 kilometers per hour over southern mainland China, according to the country’s National Meteorological Center. The international airport in Hainan was forced to cancel 69 flights, Xinhua said.
In Vietnam, residents living in high-risk areas were ordered to evacuate, and those in fishing boats were encouraged to take shelter.
Kalmaegi slammed into the northern Philippines on Monday, triggering flooding and killing at least two people. CP

The Public Security Police and the Transport Bureau dispatched officers to the Border Gate yesterday morning to tackle taxi drivers who were accused of charging passengers excessive fares when the T8 signal was hoisted. Long queues appeared at the Border Gate taxi station yesterday, with some passengers complaining to TDM that they were asked for as much as MOP1,000 to travel to Taipa. Some passengers who did not know each other also decided to share a taxi. The situation only improved after officers from the two public departments arrived. Nevertheless, there were noticeably fewer taxis entering the station with the authorities’ presence.