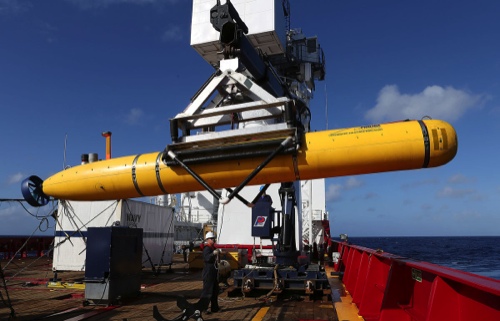 The Phoenix International Autonomous Underwater Vehicle Artemis is craned over the side of Australian Defence Vessel Ocean Shield in the search for missing Malaysia Airlines flight MH 370 on April 17, 2014

Investigators hunting wreckage of Malaysia Airlines Flight 370 were set to scan the ocean floor in waters as much as 6.4 kilometers deep in the southern Indian Ocean yesterday, amid a renewed hunt for the vanished plane.
The GO Phoenix search vessel was scheduled to arrive in its search zone yesterday and start about 12 days of sonar surveys, according to a website statement last week by the Australian Transport Safety Bureau that’s coordinating the operation. Two more ships are preparing to start work in the region as part of a year-long search.
The survey of the ocean bottom remains the best hope to find the wreckage of the Boeing Co. 777-200, which may help answer how the plane disappeared en route to Beijing March 8 with 239 people on board. An earlier scan of 850 square kilometers of seafloor in April and May, prompted by what were at first believed to be signals from the aircraft’s black box emergency beacon, found no debris in what is the world’s longest search for a missing plane in modern aviation history.
“The complexities surrounding the search cannot be understated,” the ATSB said on its website. “It involves vast areas of the Indian Ocean with only limited known data and aircraft flight information.”
Martin Dolan, chief commissioner of the Bureau, said in a Sept. 10 interview that he was “cautiously optimistic” the plane would be discovered, based on the amount of analysis performed on data indicating the path of the aircraft.
The only clues so far to the final resting place of the Malaysian Airlines aircraft have been data exchanges with an Inmarsat satellite, which suggested it ditched somewhere along an arc of ocean west of Perth, Australia.
Survey vessels using ship-based sonar have scanned about 110,000 square kilometers of ocean along this arc, producing maps to help guide the ocean-floor search that began yesterday.
The GO Phoenix, owned by Perth-based oil and gas services company Go Marine Group Pty., has been hired by Malaysia’s government and its state oil company Petroliam Nasional Bhd. It will tow a side-scan sonar vehicle close to the sea floor to search for features of the ocean bottom. The vehicle can cover 194 square kilometers per day, according to its manufacturer. David Fickling, Bloomberg