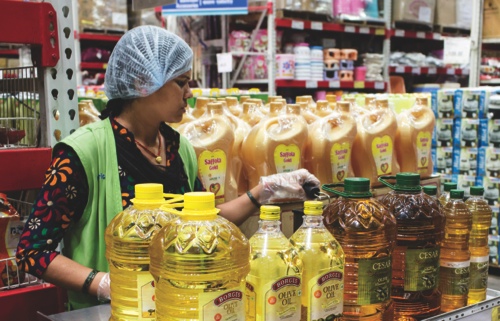 Macau is enduring another food safety scandal. A local food oil importer has recalled around 300 barrels of Taiwanese cooking oils that were suspected to contain gutter oil. The Civic and Municipal Affairs Bureau (IACM) confirmed that Macau has imported 2,300 barrels of the questionable food oil from Taiwan in the past four months, more than 1,000 of which had already been sold.
It also released a list of 21 local food producers yesterday that used the tainted oil in their production lines. The bureau did not rule out the possibility of adding more names to the list.
An examination report in Taiwan concerning the food oil in question is expected to finish today.
The Taiwanese company at the centre of the food safety fiasco is the Chang Guann Company, which allegedly mixed gutter oil into two of its lard products.
IACM claimed that all the products that were made with the lard have been recalled. Nevertheless, it could not provide an estimation on how many foodstuffs made with the Qiang Guan oil were sold.
The authorities also did not find any Taiwanese food products imported into Macau where the problematic oil was used.
In a press conference on Saturday, Leung Veng Han, head of the IACM’s Food Safety Centre, said that although some relevant foods are not available to the the local market, the department is still assessing the situation.
“It is possible that we may [later discover] some problematic products […] in Macau,” she said.
As for the reason the food oil products were allowed into Macau, representatives of the IACM said random inspections on imported products have always been performed. Nevertheless, it has also been pointed out that not even the Taiwanese authorities could discover the issue. The oil producer, it claimed, has intentionally concealed the problem as well.
“The situation is not that Macau is late to catch on to the issue. In fact, it is a planned counterfeiting. Even the authorities of the place of production were deceived,” said José Ernesto Paula from IACM’s department of food and animal safety and control.
He added that it is not only Macau that has imported the questionable products – nearby regions and foreign countries may also be affected by this food safety scandal.
The local importer involved in the incident (Tai Heng Foods)said that it carried out the food oil recall before the authorities issued the instructions. It is estimated to have lost MOP200,000 from the action.
The company also revealed that Chang Guann Company sent them a quality guarantee statement on Friday, claiming that its products did not contain unqualified food oils or illegal additives.
Chief Executive Chui Sai On mentioned the food safety incident yesterday during a press conference.
He said that the Food Safety Centre will continue to work on the issue and will prioritize the well-being of residents and visitors.
“We will immediately tackle [any product] that poses a hazard to well being of the public. To make it simple, I think all of you have seen that the relevant region has announced the termination of selling the products, taking them down from the shelves and tracking the products that are sold,” the CE said.
Mr Chui further said that he believes all the food producers who used the tarnished oil will be willing to cooperate with the authorities. JPL

China’s top quality watchdog on Saturday cautioned against the consumption of food products that may contain recycled cooking oil from Taiwan.
Taiwan police on Thursday busted a ring of six people selling hundreds of tones of recycled cooking oil made from kitchen waste and grease of leather processing plants in Kaohsiung and neighboring Pingtung.
Chang Guann Co., a well-established supplier of cooking oil in Taiwan, purchased the recycled oil to produce 782 tones of lard, and sold the products to at least 235 food companies and restaurants.
“After a preliminary inspection, the mainland has not found any imports of lard products from the company,” the General Administration of Quality Supervision, Inspection and Quarantine (AQSIQ) said in a statement.
The AQSIQ ordered local authorities to suspend inspection applications filed by the affected companies and restaurants, and carefully examine their past export records, the statement said.
It also warned that customers should be cautious of food products that may contain the tainted oil. Xinhua